In August 1958, the Birmingham and Midland Motor Omnibus Company Limited (BMMO—Midland “Red” Motor Services) unveiled the prototype of an advanced 30′ 0″ long, high capacity double-deck bus, the BMMO D9. It is believed that BMMO had envisaged building a double-deck bus of this size as far back as 1951, but such vehicles were not legalised until 1956. At this time BMMO could have simply lengthened their existing class of double-deck bus, the BMMO D7, but in view of the developments within the BMMO single-deck range a completely new vehicle was designed.

The initial D9 design had a front mounted 6-cylinder 10½-litre version of the BMMO KL engine, hydraulically operated four-speed semi-automatic gearbox built by Self Changing Gears Limited (“SCG”), Coventry, disc-brakes on both axles and power steering. The front axle was independently sprung and variable rate rubber suspension was used throughout.

The body was also by BMMO and was of fully integral half-cab construction made from aluminium alloy, with the roof, front end, and other smaller parts made of fibre glass. The doors were electrically operated, mounted on the rear platform and the vehicle seated a total of seventy-two, made up of forty on the top deck and thirty-two below. Visually, the most striking part of the appearance was the short wheelbase at just 17′ 1½″ with large overhangs at the front and rear, which allowed for a very tight turning circle.

The first BMMO D9, the prototype, carrying registration number 773FHA and fleet number 4773, was built in early 1958 and passed to the Development Department for extensive testing in April of that year. In August 1958 it was demonstrated industry press for the first time, and on Thursday 5th February 1959 it entered service at Bearwood depot, while still being monitored by the Development Department.

In February 1960, at about the same time the production versions of the D9 were starting the enter service, the prototype moved to Birmingham (Sheepcote Street) depot under normal service conditions. Unfortunately the relentless testing program had taken its toll on the engine, which failed in August 1960 with a broken crankshaft. With a replacement engine needed, BMMO took the opportunity to test the vehicle type with a turbocharged version of the BMMO 8-litre KL engine. During the next year or so it was monitored with the new engine and returned to Central Works a number of times for changes, but in 1962 it was decided that turbo charging was not effective on stop-start bus service work and the experiments ended. The turbocharged engine remained fitted to the vehicle for over a year, but by the end of 1963 a standard 10½-litre engine had been fitted, as used in the production vehicles.

During service life, 4773 received a number of modifications to the front design. The original grille and badge layout were unique to this vehicle but this didn’t provide sufficient air-flow to the radiator, so initially the BMMO badge was removed, and then a larger grille fitted. Towards the end of the 1960s, a standard grille from a production D9 was fitted.

4773 continued in normal service at Sheepcote Street depot until the 1970s, but by 1971 the prototype construction was showing serious signs of age, and the union committee at Sheepcote Street depot black-listed her due to excessive vibration and sluggish performance. The vehicle received some minor, largely unsuccessful, modifications to help cure the vibrations and moved to Birmingham (Digbeth) depot, where it quickly became equally unpopular with staff.

In July 1972, the prototype was withdrawn from service and passed to Midland Red employee Robert Shaw for preservation. For many years it was stored unused but in 2010 the vehicle passed to Ian Kimberley and restoration has now started.

Work on the first production batch of BMMO D9 double-deck buses began in 1959, and the batch consisted of ninety-four examples, all with bodywork built in-house by BMMO at Central Works (“Carlyle”). The first examples rolled off the production line in late 1959 and started to enter service from January 1960, with the final examples entering service in October 1961.

Production vehicles featured a number of differences to the prototype, including moving the 35-gallon fuel tank from the nearside to the offside, revised front end mouldings with a larger grille, waist-rail mouldings, re-designed cab door and bonnet catch. From Wednesday 1st April 1959, double-deck buses with more than 30 seats on the lower deck were required by law to have a second emergency exit, so an emergancy opening window was fitted to the first bay on the offside.

Mechanical changes made either before or soon after production started centred largely on the braking system as regrettably the advanced disc-braking system was found to be compromised on a large double-deck bus, particularly one subject to heavy loadings on multiple stop work. Unlike the prototype, production vehicles were built with traditional hydraulically-operated drum-brakes on the rear, with only the front wheels getting disc-brakes. By the time production started on the second batch, BMMO had given-up on disc-brakes and hydraulically-operated drum-brakes became standard on both axles, with vehicles from this batch being retro-fitted. The disc handbrake used on the prototype was not carried over to production vehicles, which were fitted with a conventional type.

Starting with fleet number 4872 (registration number 872KHA), a number of examples were built with illuminated advertising panels between the upper and lower deck windows. Normally these were only fitted to the offside only, but some vehicles had the panels on both sides. The panels were lit with fluorescent tubes that were initially powered by DC to AC inverters installed beneath the staircase but this caused the vehicles batteries to go flat, so from 1961 all examples of the class were built with alternators. The use of illuminated advertising panels did not catch-on and was gradually phased out.

Vehicles built from November 1960, starting with fleet number 4887 (registration number 887KHA), had a new design of destination display with the main destination and the “via” destination shown behind two separate pieces of glass, where previously both had been behind a larger single piece of glass.

Fleet number 4927 (registration number 927KHA) was built with experimental impregnated fibreglass panels (Filoplated Filon sheets) that were claimed to be lighter, give a better finish, and to be more resistant to weathering than standard painted metal panels. Traditional saloon lighting was also replaced by fluorescent tubes, with the tubes in the lower deck also illuminating the external advertising panel. While the use of fluorescent tubes was later adopted on all newly built vehicles, the coloured fibreglass panels were not successful and the vehicle later received normal repaints. 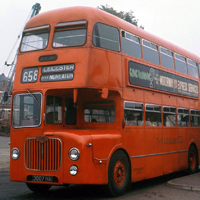 The design of vehicles from the second production batch was almost identical from those of the first, with one notable exception being the braking system. With the continuing problems with high ware rates and overheating of the disc-brakes, BMMO abandoned the technology and all vehicles from this batch were built with hydraulically-operated drum-brakes on both front and rear axles.

Following the production of fleet number 4927 from the first batch with experimental impregnated fibreglass panels, fleet number 4986 (registration number 2986HA) from the second batch was also built as such, but like the earlier example the experiment was not deemed to be successful and no more were made.

Fleet number 5000 (registration number 3000HA) was built with highly polished chrome and aluminium mouldings, and chrome hubcaps to celebrate the milestone in vehicle production, and entered service at Sutton Coldfield depot in August 1962 with a commemorative plaque mounted on the stairwell.

Production of the third and final batch of BMMO D9 production buses continued uninterrupted from the end of the second batch, with vehicles entering service from February 1963. A total of 150 examples were to be built, but only the first 105 had entered service, with bodywork built in-house by BMMO at Central Works (“Carlyle”), before production stopped in mid-1965.

By the end of 1964, production of double-deck vehicles had slowed to a crawl with only six examples entering service between January and July of 1965. At the time BMMO were having problems with shortages of skilled staff and under those difficult conditions priority had shifted to production of single-deck designs. Because of this, production was stopped and the remaining 45 chassis and partly-finished buses were sent to Willowbrook of Loughborough to have their bodywork completed, and deliveries to the depots were able to resume in December 1965. With production back to normal rates, the entire batch had been delivered and had entered service by the end of November 1966.

Vehicles in this batch had a modified version of the BMMO 10½-litre engine, known as the D9 Mk II. These changes were mostly centred on the cooling system in an effort to combat overheating issues that were found on earlier vehicles.

It is generally agreed that the D9 was one of BMMO's most successful designs, and the type was hugely popular with both staff and passengers. The only fault that people find with the type is the braking system, and the replacing of the disc-brakes with drum-brakes didn’t do anything to help this impression. It should be said that many of the people that have said this in later years did not drive the vehicles while they were in service with Midland Red, but in later years when they no longer had the strick maintenance routine. The system worked well, except for the replacement by drum-brakes, which were not air assisted and were basically inadequate compared to other manufactures’ designs, which ment they needed regular adjustment.

The advanced disc-brake system only failed due to excessive pad wear because of under developed technology—not because it didn’t stop the bus! To put this into perspective, it wasn’t until the 1990s before disc-braking systems began to appear on production buses and coaches, but Midland Red were there in the 1950s.