227 was new to Birmingham and Midland Motor Omnibus Company Limited (BMMO—Midland “Red” Motor Services) in March 1973, at Shrewsbury depot, and remained at that depot until being withdrawn from service in April 1987 by Midland Red (North) Limited. She then passed into preservation with John Sergeant, who has recently found a new storage site for her near her old home in Shrewsbury. She has not been seen at rallies since 1989, but is now undergoing professional bodywork restoration with a company called Holyoaks. 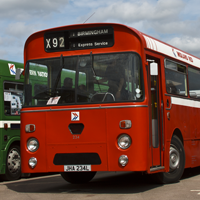 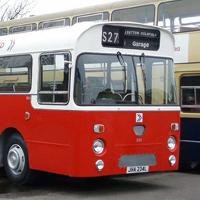 234 was new to Birmingham and Midland Motor Omnibus Company Limited (BMMO—Midland “Red” Motor Services) in May 1973, at Kidderminster depot, passing to Midland Red (West) Limited when Midland Red was broken up in September 1981. In June 1982, she passed to Midland Red (North) Limited, serving at Cannock depot until being withdrawn in October 1986. She then passed to Walton High School, Stafford, before returning to PSV service with Clews Coaches of Handsacre, near Lichfield, in the mid 1990s.

After being withdrawn by Clews she passed to Carmichael of Hastings and then to Mike James for preservation. With the “downsizing” of his operations in 2003, Mike James offered this vehicle for sale for £50, and she passed to “The S27 Midland Red Group” who fully restored the bus in white and red NBC DP livery. The group owned 234 for over ten years and it slowly fell into disuse.

In October 2015, the vehicle passed to the newly formed Wyvern Omnibus Limited of Stourport-On-Severn. This company had been formed to offer private hire services using historic buses, and also to offer engineering support to owners of historic commercial vehicles. 234 was again restored, this time with a Class-6 MOT and painted in overall red NBC bus livery, showed the company name “Wyvern” in the white band where the NBC MAP area name would normally go. The vehicle is now named “Leo” and is part of the companies private hire fleet.

PHA319M was new to Midland Red Omnibus Company Limited (MROC) at Worcester (Padmore Street) depot in May 1974, and as fleet number 319 she was numerically the first Leyland Leopard type S28. In November 1974, the vehicle left Worcester, moving to Ludlow depot for five months, before returning to Worcester, then in September 1975, she moved to Tamworth (Aldergate) depot, where it remained until May 1977 before she again returned to Worcester. In November 1978 it moved for the last time with Midland Red Omnibus Company (MROC), this time to Bromsgrove depot, where she was still in service when the company ceased trading as a bus and coach operator at the end of services on .

With the closure of MROC, 319 passed to Midland Red (West) Limited with the operations of Bromsgrove depot, and remained there until the depot was closed on . With the closure of Bromsgrove depot, most of the fleet at that depot was divided between Worcester and Redditch, but 319 became the only vehicle to move from Bromsgrove to Evesham depot at this time. Operating mainly rural services, the Leyland Leopards were popular at Evesham depot, and 319 remained there for the rest of her time with Midland Red West, and from June 1987 she carried the company’s new bus livery of red and cream.

In June 1990, Midland Red West sold 319 to the Cottage Sea Angling Club of Wednesbury and acquired Leyland Leopard type LS18 fleet number 5212 (registration number 5212HA) in exchange. This unusual deal allowed the rare LS18 to be saved for preservation as it was stored by Midland Red West for a few years before passing to a preservation group. 5212 has since passed to Birmingham and Midland Motor Omnibus Trust (“The Transport Museum”—BaMMOT), Wythall and is now undergoing a full restoration.

Meanwhile, 319 passed to Mike James of Tamworth, has since been acquired by Paul Yarsley of Stourbridge for preservation. The vehicle has undergone a full restoration and has been repainted to ren and white NBC DP livery, but as yet is still missing the original style of seats.

321 was new to MROC in May 1974 at Worcester (Padmore Street) depot. In November of the same year she moved to Ludlow depot for six months before returning to Worcester, then in September 1975 she finally settled at Stratford depot, remaining there until being withdrawn by Midland Red (South) Limited in December 1988.

After withdrawal, she found use as a mobile display unit and then passed to Carmichael of Hastings, and later Mike James, for preservation. Unfortunately, she was deemed to be beyond economical repair and therefore ended her days donating parts for other preserved Leopards, before being scrapped. 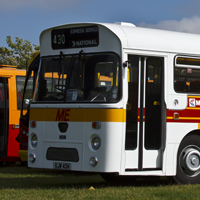 Owned by Tony Reekie and preserved in white, yellow and red NBC “Midland Express” livery as it carried while in service with Midland Fox Limited during the mid-1980s. This vehicle is in very good condition and is a familiar sign at bus rallies.

Preserved in white and red NBC “DP” livery as it carried while in service with MROC at Kidderminster depot.