In January 2018, a post was made to the MidlandRed.net forum showing photographs of Leyland Leopard registration number 5185HA. The vehicle had just changed hands after spending around 25-years stored in a barn in Cambridgeshire, and the new owner had bought the vehicle in late 2017 with the intention of converting it to a mobile home.

Before work started, the new owner wanted to research the history of the vehicle and had found this website during his search. Thankfully, forum members were able to persuade him that the vehicle was now quite rare and it would be better served by being saved as a bus. Hopefully, a restoration project will start soon.

The vehicle had originally been new to Birmingham and Midland Motor Omnibus Company Limited (BMMO—Midland “Red” Motor Services) in May 1963, and entered service at Birmingham (Digbeth) depot on Saturday 1st June 1963. This was one of 25 examples from the 100-strong LS18 batch to be delivered with LS18A specification, and as such had DP48F layout and a black roof to signify it was intended for long-distance work. It is the only type LS18A known to survive. 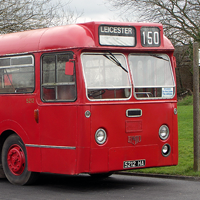 Until 5185 was discovered in a barn in 2017, it was believed 5212 was the only type LS18 Leyland Leopard known to have survived. She was new to Birmingham and Midland Motor Omnibus Company Limited (BMMO—Midland “Red” Motor Services) at Birmingham (Digbeth) depot in December 1962, and remained at that garage for her entire lift with the company. With the transfer of services and assets to West Midlands PTE on Monday 3rd December 1973, she was one of many vehicles from Digbeth depot that passed to West Midlands Passenger Transport Executive (WMPTE) at their Moseley Road depot. In November 1975, she moved to WMPTE’s Yardley Wood depot, and was re-seated to B51F in 1977, before being withdrawn in October 1978.

After being withdrawn by WMPTE, she passed to Wolverhampton Wanderers A.F.C. where she remained for just over 3 years before passing to Mr Roberts of Wolverhampton who converted her into a caravan. In November 1985, she was acquired by a Sea Angling Club who used her until 1990, but it suffered and engine failure and the Angling club wanted to replace her with a younger vehicle, so in September 1990, the club agreed with Midland Red West Limited to exchange her for their fleet number 319 (registration number PHA319M), a Leyland Leopard type S28.

At the time, Mr Ken Jubb worked at Midland Red West as a fleet administrator. Ken is very well known in bus preservation circles and he arraigned for the company to acquire 5212 so it could be saved for future restoration and preservation. Midland Red West replaced the engine with the one from their withdrawn towing vehicle, Leopard LS18 fleet number 2061 (converted from LS18 fleet number 5242), and it was then stored by the company for almost six years before she passed to a preservation group. The vehicle then passed through several failed preservation attempts before finally being acquired by Birmingham and Midland Motor Omnibus Trust (“The Transport Museum”—BaMMOT), Wythall in December 2003.

Now with BaMMOT, restoration work has begun with a bodywork overhaul and repaint, but much work remains to be done with the mechanical components and interior. Unfortunately the chassis is badly corroded so the vehicle is unlikely to return to the road any time soon.

No examples of the type LS20 Leyland Leopard are known to have survived.

6410 was new to Birmingham and Midland Motor Omnibus Company Limited (BMMO—Midland “Red” Motor Services) in August 1971 at Stourbridge depot, and moved to Redditch depot in December 1973 when Stourbridge depot passed to West Midlands Passenger Transport Executive (WMPTE). She spent three months at Worcester (Padmore Street) depot at the end of 1978 but otherwise remained at Redditch until Midland Red Omnibus Company Limited (MROC) closed in September 1981. At this time, she passed to the Midland Red (West) Limited fleet, but only lasted for about a month with the company before being withdrawn and passed to Midland Red (North) Limited at Ludlow depot. Ludlow depot closed in May 1983, but it's not recored what happened to 6410 at this time, but she remained with the company until June 1984 when she was withdrawn and passed to a Scout Group.

In 1995, Mr Carmichael of Hastings acquired 4610 for preservation, then it later passed to Mike James of Brereton for further preservation, but since Mr James’s operations closed the location of this vehicle is unknown.

No examples of the type S26 Leyland Leopard are known to have survived.