In 1964, Birmingham and Midland Motor Omnibus Company Limited (BMMO—Midland “Red” Motor Services) built a solitary type S19 single-deck bus, based entirely on the BMMO S17 but fitted with an experimental suspension system. It is believed that this suspension system consisted of using rear axle rubber units on the front, as opposed to all other BMMO saloons that featured separately designed units on the front and rear axles. 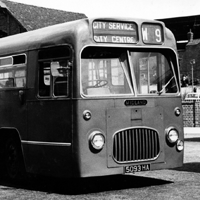 5093HA entered service at Birmingham (Digbeth) depot in July 1964, and after brief testing on services in the Black Country she spent time at Dudley depot and Shrewsbury depot, before finally settling at Worcester (Padmore Street) depot where she spent the rest of her life.

Whilst at Worcester, 5093HA acquired a front grill from a BMMO S22, possibly 5901, and while it was not unheard of for BMMO saloons to have incorrect grills fitted, it was unusual. Other than this, 5093’s life was uneventful and she was finally withdrawn from Worcester (Padmore Street) depot in April 1975, and scrapped three months later.

5093HA retained its experimental suspension throughout its working life.