In 1984, Midland Red (West) Limited acuired an additional six Leyland Nationals from new, and in addition to this seventy second-hand examples were acquired from various sources throuout the 1980s. 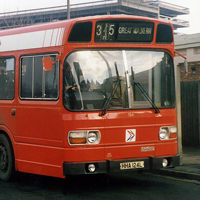 When MROC ceased trading after close of operations on Saturday 5th September 1981, the Leyland National fleet was divided between the four new bus-operating companies created in its place, with Midland Red (West) Limited receiving 121 examples at their six depots, as detailed below.

In 1983, Midland Red (West) Limited ordered six new Leyland National buses for use on Midland Express operations. As the company intended to use these vehicles on long distance services, they were ordered to “Suburban Coach” specification with coach seats, seated at DP47F, and overhead luggage racks. Other notable differences between these vehicles and existing Leyland Nationals in the fleet were the fitting of turbocharged Gardner 6HLXCT engines, automatic gearboxes and electronic destination displays.

The vehicles came into service from the end of March 1984, with the fleet numbers 1201–1206, carrying white, yellow and red NBC Midland Express livery. Four examples were allocated at Kidderminster depot for use on Limited Stop Service X92 and Service X93, with the remaining two examples allocated to Worcester (Padmore Street) depot for use mainly on Service 372 and Service 373 between Worcester and Gloucester.

Following privatisation in December 1986, Midland Red West Limited phased out the white, yellow and red NBC “Midland Express” livery in favour of a new red and yellow livery and all six of these vehicles received this new livery in 1988.

The six Suburban Coach vehicles were unpopular with drivers for two reasons. Firstly was the automatic gearbox, which seemed to have a mind of its own and made smooth driving impossible, and secondly was that these vehicles had an alarming habit of catching on fire! The fire problem became such an issue that in 1988 the union at Worcester were forced to tell management that unless action was taken their members would refuse to drive the two vehicles at that garage.

The GUC express concern with 1205 and 1206. Not for the first time these vehicles have caught fire. Anxieties are raised because the last vehicle [to catch fire] at Worcester Garage took less than 4 minutes to be burnt out. Manage­ment stated that both vehicles are being subjected to rigid checks, and notes on this type will be exchanged with the other operating depot [Kidderminster]. The GUC feel that if these vehicles catch fire again in the interests of safety they would have to ground them. The GUC further request that two replacement vehicles be bought to the Garage in the meantime. Management would consider this request.

Minutes of Meeting between Management and Worcester GUC, 13th July 1988

In April and May 1989, Midland Red West Limited withdrew all mark-two Leyland Nationals from their fleet and they passed to Badgerline Limited, Weston-super-Mare. The six Suburban Coaches passed to Badgerline as fleet numbers 3501–3506, and operated from either Weston or Bath depot. Some examples later passed to Bristol Omnibus Company Limited for use at the company’s Marlborough Street depot in Bristol. It seems that the union were right to be worried about the fire issue as while in service with Badgerline, registration number A206YWP (Badgerline fleet number 3506) again caught fire, and this time it was destroyed.

The five surviving vehicles later passed to Eastern Counties where they were re-seated with bus seats before being withdrawn in 2002, and scrapped.

These six vehicles were the only Leyland Nationals acquired new by any of the five small “Midland Red” companies formed after the Midland Red Omnibus Company Limited split on 6th September 1981.

Between the formation of the company on Sunday 6th September 1981 and 1989, Midland Red (West) Limited acquired an additional 70 second-hand Leyland Nationals to add to the 121 examples they inherited from Midland Red Omnibus Company Limited (MROC). These were all Mark I examples and many been originally been new to MROC but had been allocated to different Midland Red companies at the split in 1981. The company acquired the remaining examples from other National Bus Company (NBC) subsidiaries such as Northern General, Western National and Ribble.

Five more used Leyland National Mark I buses passed to Midland Red West Limited (First Midland Red Buses Limited) in 1998 and 2001 to be broken for parts, these vehicles were never used in service.