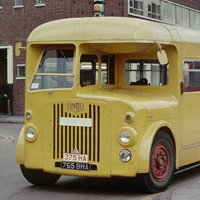 From May 1972, Birmingham and Midland Motor Omnibus Company Limited (BMMO—Midland “Red” Motor Services) converted eleven of their withdrawn BMMO D7 double-deck buses for use as towing vehicles. The conversion work involved totally removing the upper-deck and rear overhang, while the bodywork on the lower deck received a number of differing styles, with three examples receiving full-length enclosed saloons while others had open platforms.

All the towing vehicles ran on trade registration numbers plates, and as with trade plates these were sometimes changed with those on other vehicles, but the general rule was that each depot had their own trade registration number plate, so the numbers were changed whenever the vehicle moved to another depot. Early conversions were painted overall white as that was the BMMO ancillary fleet livery at the time, but in 1972 the National Bus Company decreed that support vehicles should be painted overall yellow so all future conversion received that livery, and white examples were repainted.

From September 1977, Midland Red Omnibus Company Limited (MROC) started converting a number of their Leyland Leopard type LC9 coaches to towing vehicles. The BMMO D7 towing vehicles were withdrawn as these came into service and by January 1981, all had been withdrawn and replaced. Several examples quickly passed into private ownership and have been preserved.