They were operated by Midland Red North with the fleet numbers 1801–1805 and were the only articulated buses ever owned by the National Bus Company. They entered service at Cannock depot in their original South Yorkshire PTE livery of white with green and orange bands, but were later repainted to overall red livery with “Chaserider” branding.

This vehicle originally carried the German registration number 684-Z-7766 and was imported to the UK by MAN vehicles in 1978 in an attempt to gain type approval for the operation of articulated buses in this country. It was given the UK registration number CLM346T, but until type approval was granted British regulations prohibited the collection of fares on such vehicles.

It was first operated as a free bus at the 1978 Motor Show where it was described as “West German built, 54′ (16.5m) with 162 capacity.” However 162 passengers seems a little optimistic and by the time this vehicle was in service with Midland Red (West) Limited in 1982, it was classed as 53 seats and 67 standing, making a total of 120.

CLM346T then spent a short time on the Oxford park and ride before it was was loaned to South Yorkshire PTE for trials in 1979. Four similar MAN vehicles, registration numbers DAK301–DAK304V (See below) and five Leyland-DAB built articulated buses were also on trial with South Yorkshire PTE at this time, and all were used on free or prepaid-ticket only services in Sheffield until type approval was gained and fares were permitted. The trials of these buses resulted in the PTE later purchasing 13 of the Leyland-DAB vehicles.

South Yorkshire PTE allocated the fleet number 2005 to CLM346T and this fleet number was subsequently used on this vehicle throughout it life as a demonstrator. When it was passed to Midland Red (North) Limited in January 1984, it entered service at Cannock depot with fleet number 1805 and was later repainted into overall red livery with “Chaserider” branding.

CLM346T ceased operation in the summer of 1986, and was finally withdrawn in early 1987. It was later stripped for parts and scrapped. 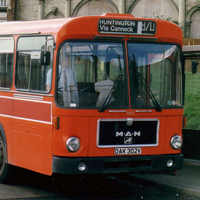 In 1979, MAN manufactured and imported another four articulated buses, registration numbers DAK301V–DAK304V, to be used alongside CLM346T as demonstrators. These vehicles were painted in the same livery as CLM346T and they joined that vehicle at Yorkshire PTE in Sheffield with fleet numbers 2001–2004. Like CLM346T, these vehicles operated with the same fleet numbers, and the same livery, throughout their service as a demonstrators.

In 1982, after the trials with South Yorkshire PTE these vehicles, and CLM346T, were transferred to Oxford for extended trials on the Cowley Road service, operating with Setright ticket machines. For driving the articulated vehicles higher pay rate for drivers was negotiated, but the drivers never received the extra money, it was paid direct to a charity and given up at the end of the experiment.

During 1983, all five MAN buses were loaned to the National Bus Company (NBC) who trialled them with their Midland Red (West) Limited subsidiary at Redditch depot. They remained with Midland Red West until the end of that year, by which time they were virtually five years old and the technology for these types of buses had moved on making the design obsolete. MAN were keen to off load the buses and all five were purchased by Midland Red (North) Limited.

DAK301V–DAK303V were delivered to Midland Red (North) Limited in December 1983, and entered service with fleet numbers 1801–1803 at Cannock depot in January 1984 still in their original White, Green and Orange livery.

DAK304V followed later in March 1984 and entered service with fleet number 1804. This vehicle had been delayed as it was not operational during its last few months with Midland Red West as a number of parts had been removed to keep the other vehicles on the road. When it was finally delivered to Midland Red North it arrived as a collection of spare parts and was reassembled at Cannock depot.

By 1984, all of these vehicle had been repainted into overall red livery with “Chaserider” branding but by the summer of 1986 they were unused, probably due to difficulties in obtaining spares. Soon after deregulation in early 1987 they were withdrawn from service by Midland Red North, to be replaced by minibuses. By Spring of 1987, these four vehicles had been exported to Australia where they were converted to AB57D by removing the centre doors and fitting an extra four seats.

Certain publications list these vehicles as AB53D, while other list them as AB63T (CLM346T) and AB59T (DAK301V-304V). Photographs of these vehicles [ Example ] in service with South Yorkshire PTE and Midland Red North clearly show them to have triple doors. However, later photographs [ Example ] show them with double doors so one can only assume that this is the source of confusion. However, I am told that all five of these vehicles were infact AB53T from new and plated to carry 67 standing passengers, making a total capacity of 120, and so were sometimes quoted as AB53T 67. All five of these vehicles remained with this specification throughout their service in the UK, and after being exported to Australia (CLM346T was not exported but scrapped) they were converted to AB57D by removing the centre doors and fitting an additional four seats.