Leyland launched the Olympian chassis at the 1980 Commercial Motor Show, and production began soon after. In 1988, Volvo acquired the Bus and Truck production interests of British Leyland and many Leyland products were soon discontinued. However due high demand, production of the Olympian chassis continued at the Leyland Bus Assembly plant at Workington until 1993. Production then transferred to a new plant at Irvine, Scotland, and the Leyland name was dropped, with vehicles produced from this time carry the name “Volvo Olympian.”

Midland Red West was never a fan of double-deck buses and the numbers operated were tiny. Four Daimler Fleetline vehicles were used in the early 1980s, and the same number of Bristol VR were operated at Redditch depot in the late 1980s, but by the early 1990s there were no double-deck buses of any type in the fleet.

By the end of 2002 the company, now called First Midland Red Buses Limited, had undergone a change of management and under the control of FirstGroup the need for double-deck buses on certain school routes had been identified. Over the following years the number of double-deck buses in the fleet slowly grew and during this time several Olympian based examples were acquired from other FirstGroup operators. Most of these were the newer Volvo built type, but a small number of the older Leyland versions were also used.

This vehicle was part of a batch of six double-deck buses new to Northampton Transport Limited, in February and March 1984. It was delivered to First Midland Red Buses Limited, Worcester, at Padmore Street depot, Worcester on 3rd March 2003, intended as a replacement for the Volvo double-deck vehicle being used at that depot at the time.

It was never operated in service by First Midland Red, and after being stored for several months it passed to First Edinburgh in June 2003. 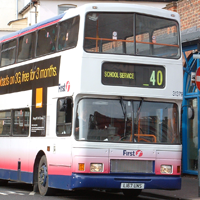 In June 2004, First Midland Red Buses Limited acquired two Leyland Olympian double-deck buses, fleet numbers 31378 and 31379, from First Glasgow, with a third example, fleet number 31380, arriving in September 2004. All three of these vehicles have “low-bridge” bodywork with an overall height of 13′ 7½″.

When introduced, all three vehicles were used primarily for school services, with one vehicle allocated to Worcester (Padmore Street) depot and the other two to Evesham depot. However, they also saw use on other services such as Worcester Overground Service 28 “Purple Line,” which was later withdrawn and replace with extended Service 44. 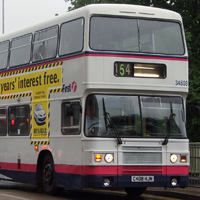 On Thursday 25th August 2005, a driver from Worcester depot was sent to collect a doubler decker from Chelmsford. He returned with C408HJN, a Leyland Olympian with CH42/30F ECW bodywork that was new to Eastern National in January 1986.

The vehicle arrived in yellow and green First Essex livery was stored for a few days at Worcester depot before moving into the body shop to be prepared for repainting. After being repainted by hand at Worcester depot, the vehicle entered service at Evesham depot. It remained at Evesham depot until the end of 2006, when the depot closed, and then moved to Redditch depot. While at Redditch depot, it was involved in a heavy head-on collision with a van while operating a school service near Stratford-Upon-Avon. The vehicle was recovered to the body shop at Worcester depot and stored for several weeks before it was decided the damage was beyond economical repair, and the vehicle was scrapped.