Birmingham and Midland Motor Omnibus Company Limited (BMMO—Midland “Red” Motor Services) suspended production of vehicles was suspended during the Second World War, but some development work continued at Bearwood depot and, in 1944, BMMO produced a new double-deck prototype with revolutionary new styling, the BMMO D1. When BMMO vehicle production restarted in 1946, the company decided to focus their attention on single-deck vehicles and initial post-war double-deck acquisitions were from outside manufactures, with 100 vehicles being bought from AEC, classed by BMMO as type code AD2.

In 1949, BMMO started production of their first post-war double-deck vehicles, the BMMO D5. The D5 design was based heavily on the BMMO D1 wartime prototype, featuring an open-platform rear entrance, half-cab design combined with BMMO’s new trend setting concealed radiator, but whereas the type D1 had 7′ 6″ wide bodywork by Weymann, the type D5 had 8′ 0″ wide bodywork by Brush. Bodywork on both classes of vehicle was built to BMMO’s own design. 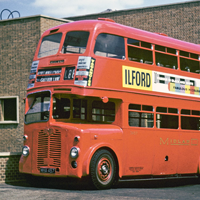 The first batch of one hundred BMMO D5 double-deck buses entered service between July 1949 and May 1950. The entire batch had bodywork by Brush, and although the type D5 was six inches wider appearance was very similar to the AEC Regent type AD2 acquired by BMMO from 1948. Before the war, BMMO had favoured front entrances for their double-deck designs, but the type D5 continued the company’s new post-war practice in having an open platform rear entrance. Seating was 30 seats on the upper deck and 26 on the lower deck. 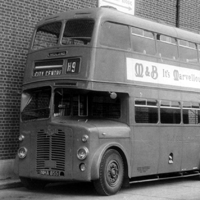 Between August 1950 and February 1952, a second batch of one hundred vehicles entered service. Unlike the first batch, these were fitted with electrically operated four-leaf folding entrance doors, and to distinguish them from the earlier open-platform vehicles, they were designated the BMMO type code D5B.

Other notable changes to this second batch of vehicles included an improved seating design and a different radiator grille. These vehicles also had an emergency door fitted at the bottom of the staircase on the rear wall of the vehicle, which was a legal requirement on vehicles fitted with platform doors.