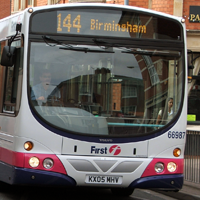 In the last week of August and first week of September 2005, First Midland Red took delivery of six Volvo B7RLE single-deck buses, fleet numbers 66982–66987. These vehicles were fitted with B43F Wright Eclipse bodywork and had been new to Leicester Citybus Limited (“First Leicester”) in April 2005. They entered service at Worcester (Padmore Street) depot in the first two weeks of September after being fitted with new cash trays and ticket machines, and having their destination blinds reprogrammed.

The originally intention was to use these vehicles alongside the Alexander Dennis Enviro300 singel-deck buses at Worcester depot on Service 144 between Birmingham and Worcester. However, Service 144 was being inter-worked with Kidderminster depot at that time so this was not practical, as the Kidderminster drivers and fitters had not been trained in the use and maintenance, and it was decided that training two depots would not be economical. Therefore, they entered into service on Service 44, running between Great Malvern and the Worcestershire Royal Hospital.

In April 2006, First Midland Red started to passed four of these vehicles back to First Leicester, with an equal number of simular Volvos replacing them at Worcester depot from First Northampton.

Following frequency reductions on services at Leicester, three addition Volvos moved to First Midland Red at Worcester depot in October 2009. These were fleet numbers 66976 and 66977 which arrived on 6th October, and fleet number 66978, which arrived on 8th October. All three vehicles entered service within a few days, and two Dennis Lance SLF Pathfinders were taken out of service at this time.

On Loan from First Northampton and First Leicester

In September 2005, two more Volvos arrived at Worcester depot. These were fleet numbers 66969 and 66976, registration number KX05MJU and KX05MGZ, and were on loan to First Midland Red from First Northampton and First Leicester. Like the other Volvos at Worcester, they were used mostly on the Worcester–Malvern Service 44.

They both returned to their owners in November 2005.

On Friday 2nd September 2005, and again on the Monday 5th September 2005, a Volvo B7L Articulated bus, on loan from First Somerset and Avon, was demonstrated by First Midland Red in and around Worcester City Centre. The purpose of the visit was to demonstrate to local councillors that an articulated vehicle could be practically used on the city’s park and ride services, and thus to try and persuade the council to release funds for such vehicles to be used.

The visit also coincided with the re-launch of the park and ride services, with the new brand name “Worcester Express,” and the vehicle helped to create more publicity. The public were invited to look over the vehicle while it was parked in Angel Street, near the bus station, and councillors and press were given demonstrations journeys to and from the park and ride site and Royal Hospital, but the vehicle never operate in service at Worcester.

The vehicle on loan was fleet number 10177 (registration number WX55HWC) which was brand-new at the time and waiting to enter service with First Somerset and Avon for use on their Service 18/418, running between various Bath University sites and Bath City Centre. While on loan to Worcester, the vehicle carried an orange version of FirstGroup’s Barbie livery, without any type of branding. By the time it had entered service at Bath, it had been fitted with “Bright Orange Bus” branding for the university services. 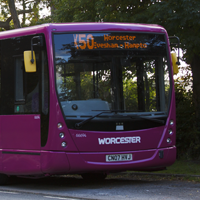 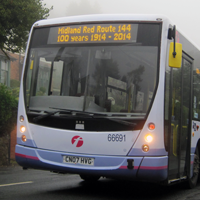 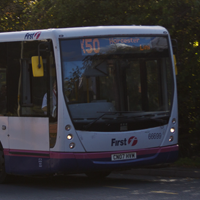 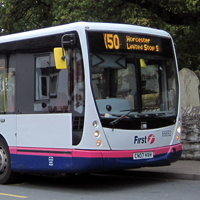 In 2007, Bebb Travel Public Limited Company, which had been a subsidiary of Veolia Group since 2005, acquired a batch of Volvo B7RLE single-deck buses, fitted with B45F Plaxton Centro bodywork. Bebb Travel later renamed to Veolia Transport Cymru Limited. These vehicles were withdrawn in 2011 and 2012 and passed to bus dealers Ensign Bus Company Limited of Purfleet.

FirstGroup purchased several examples for use at their First Midland Red Buses Limited subsidiary at Worcester depot. These were repainted into standard FirstGroup “Barbie3” livery and delivered to Worcester depot from September 2011.

A total of nine examples have been acquired by First Midland Red, and carry fleet numbers 66691–66699. The last vehicle acquired is numerically the first, number 66691. This vehicle was acquired shortly after FirstGroup changed their corporate livery in 2012, and was therefore the only example to enter service in the (then) new “Urban” livery.

These vehicles clearly had a hard life with Veolia as they were plagued with mechanical problems, and although they had been intended for use on longer inter-town services they were soon banned from such routes. Due to frequent failures they were initially only used on routes within the city where a broken-down bus could be quickly recovered with minimal impact on service. The engineers at Worcester persisted with the problems and eventually the rules were relaxed allowing the type to be used further from the depot.

With the on-going mechanical problems, most of the nine vehicles suffered a total engine failure during their first few years at Worcester. Some, such as 66694, have been quite spectacular with large holes in the engine block and pistons, con-rods etc being left on the road! All of these received new engines built by hand (to Volvo specification) at Worcester depot, and it generally agreed that these are now the best to drive and most reliable.

In summer 2015, First Midland Red embarked on a program to refurbish five examples from this batch. The first vehicle to be subject to the program was fleet number 66694, which was taken off the road on Monday 17th August 2015 for a bodywork overhaul at Worcester depot’s body shop. All seat cushions and handrails were removed leaving only the seat frames inside. It was then sent to Hereford Coach and Commercial Refinishers to be painted in FirstGroup “Urban 2” livery. On return to Worcester depot, the interior was refitted, now in standard FirstGroup colours, and the exterior was treated to route branding for the new Limited Stop Service X50. The quality of the finished paintwork on 66694 did not impress the First Midlands Managing Director, Mr Nigel Eggleton, and later repaints were sent to Thornton Brother Limited of Ashington, but when 66692 returned on Friday 20th November 2015 it was in the wrong colour! It returned to Thorntons to be corrected, but soon afterwards the refurbishment program was cancel with only three vehicles, fleet numbers 66692–66694, being finished. A few months after 66692–66694 were refurbished, the seatbelts were removed from all three vehicles. 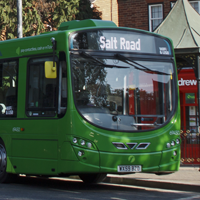 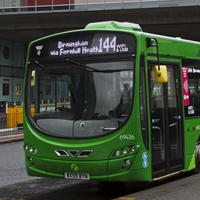 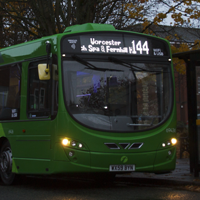 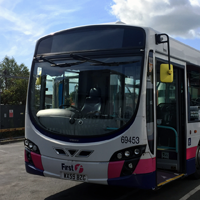 By 2017, the fleet of Alexander Dennis Enviro300 and Dennis Trident 2 vehicles being used by First Midland Red Buses Limited to operate their Service 144 between Worcester and Birmingham were almost 12-years old and showing signs of age. More importantly, these vehicles were fitted with Euro3 specification engines that were not environmentally-friendly enough to meet forthcoming emissions standards for buses being operated in Birmingham City Centre.

Rather than face the huge expense of buying new vehicles, and to avoid the problems encountered when the new StreetLite and StreetDeck buses were acquired in 2015, it was decided to refurbish the twelve ex-Bristol Volvos at Leicester and transfer them to First Midland Red at Worcester for use on Service 144. This would display an equal number of Worcester’s Enviro300s to First Potteries, and in turn older Volvo B7L single-deck buses would move from Potteries to First Leicester.

Starting in July 2017, each vehicle in turn was withdrawn from service at First Leicester and received a full bodywork overhaul. It was then sent to Thorntons Bus Refurbishment in Northumberland for further work, which included being repainted to a new overall green livery, full interior refurbishment, fitting of new destination equipment, and the fitting of USB charging points and Wi-Fi equipment.

The original plan was to have the interior trimmed to match the new green livery, however this was overruled by Group as being too problematic if the vehicles were later repainted to conventional livery, so a new moquette was designed that better fitted the normal FirstGroup corporation colour scheme. This moquette was unique for these vehicles and the whole refurbishment program was delayed while Thorntons waited for it to arrive.

By March 2018, eleven of the twelve vehicles had entered service at Worcester depot, all in overall green livery with graphics to say the bus was only “half-dressed” and that the full new look would be coming soon. That new look finally arrived on Friday 8th June 2018 when the first example was fitted with “Salt Road” branding, which is the new re-branded name for Service 144. Delivery of the last vehicle (fleet number 69460) was delayed due to a shortage of the unique moquette, but at the time of writing is expected by late July.

The early examples, with Wright Eclipse Fusion bodywork, were very impressive vehicles. If you talk to any Worcester driver who had a chance to drive these vehicles, you will almost certainly find they say they were the best vehicles the garage has ever operated. In fact, the only drivers who didn’t like them all complained that they were too easy to drive and felt too much like a car!

These vehicles felt very well built with none of the shakes and rattles that are found on the Alexander Dennis Enviros which were the same age. Unlike the Enviros, the driver could see where he was going at night as they had headlights that work, and the interior was designed in such a way that the interior lights didn’t reflect in the windscreen. The other notable difference when compared with the Envro was the quality of the gear change, which was very smooth in the Volvo making the vehicle easy to drive smoothly. Anyone who has been a passenger on an Enviro in stop-start traffic will know smooth driving is a distant dream. The only downside to the Volvo was poor heating in the cab, and the fact that they were so easy to drive caused one or two accidents, as drivers tended to get a little too complacent with them.

The examples acquired second-hand from Veolia with Plaxton bodywork are not so popular. The early mechanical problems have gained them a reputation for being unreliable, and although they have now improved there are still drivers who try to avoid them. However, with DP style seats and stable handling they are much more suited to longer distance route and are quite popular with drivers who work those types of route.

The examples with Wright Eclipse Urban 2 bodywork acquired from the latter part of 2017 were much the same as the earlier versions to drive, and quickly became popular with drivers. Despite the extensive refurbishment program these vehicles were still around 8-years old by the time they found their way to Worcester depot, and most had well over 450,000 miles on the clock by the time they arrived, so although the fit and finish was to a very high standard, they still feel a bit worn out from the driver’s seat.

† Part-history only at this time.