Examples of the Mercedes-Benz L608D were used in service with Midland Red West Limited and First Midland Red Buses Limited from the launch of the Citibus network on 23rd November 1985, until the last withdrawals from Hereford depot in August 2001, giving a service life for the type of almost sixteen years.

It’s not surprising to find that many differing liveries were used during this time. In the early years each local network had it’s one area livery but these were phased out in the early 1990s to give a unified corporate look for Midland Red West, which had minor changes in the late 1990s when the company became First Midland Red.  Overall advertising was very popular on these vehicles, and there were over twenty unique liveries used on these minibuses. 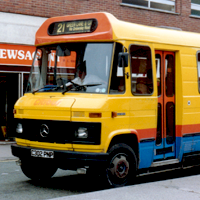 When Midland Red (West) Limited launched their first sixty Mercedes-Benz L608D minibuses (fleet numbers 1301–1360) into service at Worcester (Padmore Street) depot on 23rd November 1985, for the new Worcester Citibus services, they all carried a unique new livery of yellow and blue separated by an orange band. The Citibus logo was shown on the sides and front in large orange lettering, along with the city coat-of-arms. On delivery of these vehicles, the Citibus logo was also shown on the rear window but as this was an emergency exit and the logo was made from vinyl it had to be removed so not to prevent the glass being broken.

Other than vehicles that carried overall advertising, and the occasional demonstrator or loan vehicle, all of the minibuses in service at Worcester depot carried this livery, and as no other type of minibus was allocated to that depot this livery was only ever used on Mercedes-Benz L608D minibuses.

Six of the Mercedes-Benz L608D minibuses acquired from Southdown Motor Services of Brighton in March 1989 (fleet numbers 1443–1446 and 1448–1449) also carried this livery upon entering service at Worcester (Padmore Street) depot on 1st April 1989. These were the last vehicles to be repainted into this livery and from July 1990, the livery was phased out by Midland Red West phased favour of the standard Midland Red West red and cream bus livery with “Citibus” branding. By the end of 1994 no more examples of this livery existed.

On 24th October 1987, the Wyre Forest Shuttle services expanded to include Bewdley. Five new Mercedes-Benz 609D minibuses, fleet numbers 1407-1411, entered service at Kidderminster depot at this time to meet the increased demand. These five vehicles also carried “Shuttle” livery; however, the words “Wyre Forest” were no longer shown on the sides of the vehicles.

In 1988 and 1989, small numbers of additional Mercedes-Benz L608D minibuses joined the fleet at Kidderminster depot from various source, and these vehicles received “Shuttle” livery. However, as with the “Citibus” livery at Worcester, Midland Red West phased out the Shuttle livery in favour of the red and cream Midland Red West bus livery, with “Shuttle” branding, with the first repaints in January 1991. 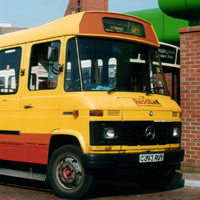 On Saturday 19th April 1986, Midland Red (West) Limited started minibus services in Redditch Town under the brand name ReddiLink, and the company acquired eighteen new Mercedes-Benz L608D minibuses (fleet numbers 1387–1404) for these services. These vehicles entered service at Redditch depot in new ReddiLink livery. This livery followed the same theme as the Citibus livery and Wyre Forest Shuttle livery used at Worcester and Kidderminster, except for red being used on the rear and lower parts of the bodywork. As with the other minibus liveries, the local area branding logo “ReddiLink,” was shown on the sides and front of the vehicles.

In July 1990, Midland Red West Limited started to repaint their fleet of Mercedes-Benz L608D minibuses into their standard bus livery of red bodywork with cream roof and window frames. The company’s Wyvern logo was shown on the bonnet and above the windows at the rear, with local area branding, such as “Citibus”, “Shuttle” or “Hereford Hopper” shown above the doors. The name “Reddibus”, originally introduced in March 1976 as a forerunner to Midland Red’s Market Analysis Project (MAP), replaced the ReddiLink name on vehicles operating from Redditch .

To commemorate the battle of Worcester a number of vehicles operating in the city were given names related to the civil war, such as “Cromwell” which was the name given to number 1351 (R/No: C351PNP). These names were shown above the doors.

By the end of 1994, all the Mercedes-Benz L608D minibuses in the fleet, except those showing overall advertising, carried this livery. In 1998, when the company started to trade under the name First Midland Red, standard corporate FirstGroup markings, with the fleet name “Midland Red”, replaced the Wyvern logo, local area identities and vehicle names.

Yellow with Red and Blue strips

All of these vehicles, except 1490 (R/No: C490BHY) which recieved overall advertising, were later repainted to Midland Red Westred and cream bus livery, with “Hereford Hopper” branding. 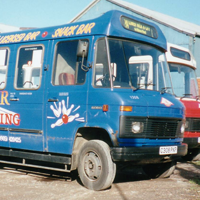 1308 was new to Worcester (Padmore Street) depot in yellow, orange and blue Worcester “Citibus” livery, and repainted to overall blue livery with advertising for Worcester Ten-Pin Bowling in May 1994. The vehicle still carried the advertising when it was withdrawn in July 1998, and exported to the West Indies in December 1998.

1337 was new to in yellow, orange and blue Worcester “Citibus” livery, and repainted in January 1991 to red and cream Midland Red West bus livery with “Citibus” branding [ Photograph ].

It received overall advertising for Worcester Evening News in c.1995, and remained in that livery until being withdrawn in August 1998.

1343 was new to Worcester (Padmore Street) depot in yellow, orange and blue Worcester “Citibus” livery. It was repainted in the early 1990s to a white livery with think red and blue diagonal bands and overall advertising for Hylton of Worcester, the local Toyota dealers.

In November 1995, it was repainted to a bright yellow livery, still with overall advertising for Hylton of Worcester. Hyltons later changed their dealer franchise to Fiat, and the livery on 1343 was modified with the addition of a thick blue diagonal band, and the replacement of the Toyota name and logos with those of Fiat.

1344 was new to Worcester (Padmore Street) depot in yellow, orange and blue Worcester “Citibus” livery. It was repainted in the early 1990s to a white livery with think red and blue diagonal bands and overall advertising for Listers of Worcester, the local VW Audi dealers.

In c. 1996, it was repainted to a bright green livery with overall advertising for Hylton of Worcester, the local Toyota dealer. Hyltons later changed their dealer franchise to Fiat, and the livery on 1344 was modified with the addition of a thick blue diagonal band, and the replacement of the Toyota name and logos with those of Fiat.

1350 was new to Worcester (Padmore Street) depot in yellow, orange and blue Worcester “Citibus” livery. In February 1989, it was repainted a white livery with overall advertising for Radio Wyvern.

In July 1990, the advertising was removed and this vehicle became to first Mercedes-Benz L608D to be painted in the red and cream Midland Red West bus livery. The “Citibus” brand name was carried above the doors, and the vehicle was later named “The Civil Was Special.”

In c. 1993, it received overall grey livery with advertising for Stoulton Motor, Hyundai dealer, and remained in this livery until being withdrawn in August 1998.

1378 was new to Kidderminster depot in yellow, orange and blue “Wyre Forrest Shuttle” livery. In June 1988, it was repainted to iverall red livery with advertising for Hills Tool Hire and S.A.M. DIY Centre, Bromsgrove.

The overall advertising was removed in December 1990, when the vehicle was repainted into red and cream Midland Red West bus livery with “Shuttle” branding. 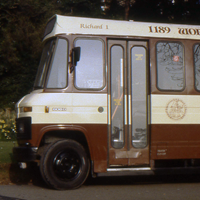