The SOS “XL” class was designed and built as a luxury coach by the Birmingham and Midland Motor Omnibus Company Limited (BMMO—Midland “Red” Motor Services), Smethwick. The class was the first dedicated long-distance coach designed by the company, but unfortunately the design was soon found to be a failure and within two years of introduction the entire class had received new bodywork, been reclassified, and downgraded to bus work, making the class extinct.

† Both names “Excel” and “Excelsior” have been recorded, but it is not known which is correct.

The only batch, made up of fifty coaches, were built from 1928 with lavishly appointed C30F bodywork by either Brush (registration numbers HA4956–93 and HA5005–6) or in-house by BMMO (registration numbers HA4994–99 and HA5001–04). The entire batch were fitted with the SS-type 5.047-litre, 6-cylinder petrol engine from new, but otherwise the mechanical specification was simular to the SOS “QL” and “M” class of bus.

Many of the batch entered service at Birmingham (Digbeth) depot in 1929 for use alongside SOS “QLC” charabancs, but the combination of heavy high-specification coach bodywork and lightweight bus chassis was quickly found to be compromised, and the vehicles were both underpowered and had unpredictable handling. The entire batch were withdrawn from late-1929 to mid-1930, some without entering service, and the coach bodywork was removed and fitted to a new specifically designed coach chassis, known as the SOS “RR”.

Reregistered and Reclassified as Buses 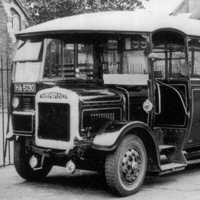 From January 1930, the body-less “XL” chassis were fitted B34F Ransomes, Sims and Jeffries bus bodywork taken from, or intended for, the equalliy short-lived SOS “MM” 4-cylinder class of bus. They were reclassified as type “MM” to match the bodywork, but as the chassis still had the original 6-cylinder petrol engines a new class of SOS “MM” 6-cylinder buses was formed. On changing bodywork, registration numbers were kept with their corresponding body so all chassis were reregistered at this time.

My thanks are extended to Tim Brown by providing detailed documentation originally recorded by the late John Goddard. The information given on this website is still incomplete, so if anybody is able to provide more details or good quality photographs I would like to hear from you. Thank you.