Double-deck vehicles were never popular with the management of Midland Red West Limited, who were very much in favour of high frequency minibus services on local town routes and standard size single-deck buses for trunk routes. The company had operated four Daimler Fleetline double-deck buses during the early 1980s, while under the control of the National Bus Company (NBC), but these had all been disposed by the end of 1984, of long before privatisation in December 1986.

However, the unexpected actions of two employees in 1987 caused Midland Red West Limited to divert from its business plan and acquire three Bristol VR double-deck buses for use on town services in Redditch.

In 1987 two Midland Red West inspectors, Mick Elkins and Stan Pemberton, set up the Redline Bus Company with the intention of competing directly against Midland Red West on the number 57 and 58 Matchborough circular services in Redditch. The new company was granted an operators licence for two vehicles, and registered two peak hour services with the numbers 7 and 8, covering the same routes as the Midland Red West route numbers 57 and 58.

Both inspectors were still in the employ of Midland Red West when they set up Redline, and naturally both were sacked as soon as word got out. It is said that the late Ken Mills, Managing Director of Midland Red West at the time, took the action of these two employees quite personally. Midland Red West Limited had only been privatised a few months earlier, and thus was having to survive without the support of the National Bus Company (NBC) for the first time. Therefore, it must have been quite upsetting to find two employees, both of whom were in a position of responsibility and trust, had used knowledge gained with the company to launch an attack on one of their most profitable routes at such a critical time.

Redline Bus Company started trading on Monday 12th October 1987 using two double-deck buses, running Service 7 anti-clockwise around Matchborough during the morning peak-time, and Service 8 running in the opposite direction during the afternoon. Midland Red West Limited responded immediately and quite aggressively to the competition, doing their best to ensure one of their own vehicles was always in front of a Redline bus, and using blocking tactics at bus stops. These actions would later earn them a reprimand from the Traffic Commissioner. 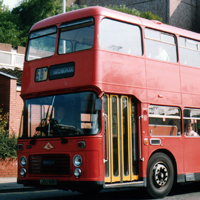 Midland Red West Limited must have seen the Redline double-deck buses competing against their own Mercedes-Benz L608D minibus as quite a threat, and within two weeks of the introduction of the Redline service, Midland Red West was meeting the competition with three dual-door H43/27D Bristol VR double-deck buses acquired from their subsidiary Bristol Omnibus Company Limited (trading as “Bristol City Line”).

Initially these vehicles were on hire from Bristol OC and operated with Midland Red West with their original Bristol OC fleet numbers in full Bristol OC livery of red, blue and yellow. The only modifications made was a white band above the rear two windows on the lower deck, which displayed the Midland Red West fleet name, and the company’s triangular Wyvern logos on the front and rear.

The Christmas 1987 staff news letter (titled “Wyvern Express”) announced the arrival of the first two vehicles as below, quietly brushing over the issue of a competing operator in the town…

…Redditch has also been allocated two double deck vehicles on an experimental basis. The vehicles concerned are Bristol VRT SL3/501s with Eastern Coach Works 70 seat and dual door bodywork. They are numbered 5032 JHW 106P and 5039 JHW 113P and have come from our new sister company Bristol City Line. Their introduction is to provide greater seating capacity at peak periods.

In April 1988, Midland Red West Limited purchased all three of these vehicles and they remained at Redditch depot until early 1990 when they were replaced with new Leyland Lynx single-deck buses.