Throughout the history of the company, Birmingham and Midland Motor Omnibus Company Limited (BMMO—Midland “Red” Motor Services) had always tried to maximise the seating capacity of the buses in their fleet. However in 1977, by this time renamed to Midland Red Omnibus Company Limited, they experimented with a totally new approach by introducing a number of second-hand minibuses at two depots in their southern division. 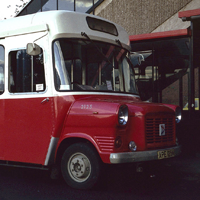 In 1977, the Midland Red Omnibus Company Limited (MROC) was conducting their Viable Network Project (VNP) route surveys and the need for smaller buses on certain routes was identified. Following this, in May 1977, the company acquired three second-hand Ford Transit minibuses from London County, which had previously been used for a Dial-a-Ride service in the Harlow area in their green and white livery. All had B16F bodywork by Dormobile, and on passing to Midland Red they were allocated the type code M1 and repainted to red and white NBC dual-purpose livery. On 23rd July 1977, two of these vehicles entered service with Midland Red at Evesham depot for the new “Wayfarer” network of services, and the third entered service at Redditch depot for revisions to the “Reddibus” network of services on the same day.

Initially these three vehicles had the fleet numbers 441–443, which had previously been allocated to three Leyland Leopard C15 coaches that Midland Red acquired in 1976 for National Express work. The three coaches passed to South Wales Transport before entering service, leaving a gap in the fleet numbering sequence, which Midland Red chose to fill with the Transits. In September 1977, the three original minibuses were renumbered to fleet numbers 2121, 2124 and 2123, and joined by an additional two identical minibuses that were numbered 2122 and 2125. All five vehicles now had fleet numbers in sequence with their registration numbers.

The Ford Transit minibuses were not considered very suitable, mainly due to the capacity being too small with only sixteen seats, and the passenger door being manually operated which caused quite a lot of inconvenience. Midland Red soon replaced them with twenty-seven seat Shortened Ford R192 minibuses but after being withdrawn, some of these vehicles found further use at Midland Red as ancillary vehicles, with 2122 for example being used by the Midland Red publicity department.

On 23rd July 1977, as part of revisions to their “Reddibus” network, MROC introduced a new circular service to access the Smallwood area of Redditch and serve the large Chloride Alcad Limited owned Battery Factory on Union Road adjacent to the junction with Lodge Road. The new route was numbered R15 for clockwise, and R16 for anti-clockwise journeys, and also serviced the Lakeside and Lodge Park areas of the town. Because of size restrictions in the Smallwood area the company was unable to use standard size vehicles, so the service was introduced using a single type M1 Ford Transit minibus operating the route in alternate directions timed to provide one journey in each direction per hour.

As stated above, the type M1 Ford Transit minibus was not considered suitable, so from December 1977 an experimental Shortened Ford R192 was undergoing trials in Redditch on the R15 and R16 services as a possible replacement. The trials were successful and the odd-looking short Fords became a permanent replacement.

In October 1979, the company announced that due to an increase in use the R15 and R16 service would be converted to operate with normal sized vehicles, but a note on the timetable at the time stated that the service might operate with either type of vehicle. To overcome the size restrictions in the Smallwood area, Midland Red abandoned this section of the route if favour of operating via Mount Pleasant and The Mayfields.

On 19th April 1986, with the introduction of the Midland Red West “Reddilink” network of services using Mercedes-Benz L608D minibuses, the R15 and R16 routes renumbered to 65 and 66, and the timetable changed for the first time to operate twice hourly in each direction. First Midland Red withdrew the service on 22nd September 2002 as part of a major restructuring of services timed to coincide with the opening of the new bus station in the town, while the Battery Factory closed in 1993 and was sold in 1998 for redevelopment, being demolished to make way for a B&Q store in 2002.