The popular Leyland Titan chassis was a low-loading, front engine design for double-deck bus bodywork. Production started in 1927 and continued, in various forms, until 1970.

In the early in 1950s, Birmingham and Midland Motor Omnibus Company Limited (BMMO—Midland “Red” Motor Services) ordered 100 double-deck buses built on the Leyland Titan PD2/12 chassis to supplement production of their own vehicles, which was falling behind demand. 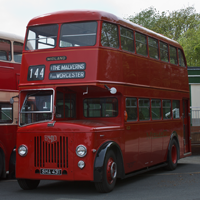 Birmingham and Midland Motor Omnibus Company Limited (BMMO—Midland “Red” Motor Services) allocated the type code LD8 the batch one-hundred of Leyland Titan double-deck service buses acquired new from late 1952. The first example, fleet number 3978, was delivered in August 1952 and entered service in November of that year after being exhibited at the 1952 Commercial Motor Show, while the remainder of the batch entered service from January 1953. The first example featured a slightly different specification to the remainder, having six sliding ventilators on the lower deck, and ventilators in the front dome similar to those found on the BMMO D5, whereas the rest of the batch had eight sliding ventilators on the lower deck and no ventilators in the front dome.

All type LD8 buses were delivered with 56 seat Leyland Farington bodywork, modified at BMMO’s request with a concealed radiator front assembly, having a grill with 12 vertical slats and room for the BMMO logo. Otherwise, these vehicles were built to standard PD2 specification with Leyland 0600 diesel engine, synchromesh gearbox and vacuum braking system. BMMO later modified the engines and the Midland Red Titans were noted to produce a hollow, deeper note compared with vehicles used by other operators.

Initial livery for all examples was overall red with gold “Midland” fleetnames and pinstripe lining, with black wheel arches and window surrounds. With the introduction of spay painting in the mid-1950s, these vehicles suffered in the same manor as the rest of the fleet and lost the black relief and gold lining, becoming a plain overall red.

The last two vehicle in the batch entered service in June 1953, two months before the first examples of the next generation of BMMO designed double-deck buses, the BMMO D7. Being non-standard in the BMMO fleet, the type found service only at a select number of depots, presumably to save on the cost of training engineering and driving staff in the maintenance and use of a relatively small amount of vehicles. Movement between depots for this type was also uncommon and most examples remained at the same depot until the mid 1960s, when they were approaching the end of their service lives.

Initially allocation of the batch of one-hundred type LD8 vehicles was divided between just seven depots, as follows…

Although Oldbury depot received ten new examples these were short-lived and were soon moved to other depots, mostly Wolverhampton, and replaced with BMMO built vehicles, while Ludlow depot didn’t receive any new examples, but four moved there in the mid 1950s, followed by another four in the early 1960s.

The BMMO specified concealed radiator design was so successful that it was adopted by Leyland as a new version, know as the PD2/20, and was offered by Leyland to all operators for the remainder of Titan production.

With BMMO, the type LD8 was very popular among drivers as they had sufficient power and the synchromesh gearbox was an improvement on the crash box found in all BMMO designed vehicles until the arrival of the BMMO D9 in 1960. However, conductors were not as happy with them as their low seat backs, lack of stanchions and soft rolling suspension meant they were not the best place for working.

Withdrawals began in 1965, with the last example, fleet number 4049, surviving until December 1967, which was a surprisingly short life when compared with Titans operated by other companies. Many ended their service as Engineering Float vehicles, or at depots that had previously not operated the type, such as the nine examples that moved to Leicester area depots before withdrawal.

One example of the type, fleet number 4031 (registration number SHA431), has survived and is now preserved by the 1685 Group. The vehicle is housed at Birmingham and Midland Motor Omnibus Trust (“The Transport Museum”—BaMMOT), Wythall, and since 2002 has been undergoing an extensive restoration.

† The Leamington Spa depot at Old Warwick Road was one of the first garages built by BMMO, at a time when vehicle heights were lower. As a result, it was unable to accommodate the taller more modern double-deck vehicles, and therefore all such vehicles allocated to Leamington Spa depot were housed at Warwick garage, which was an outstation or “dormy garage.” This practise continued until September 1957, when a new purpose built garage at Myton Road in Leamington Spa opened, and Warwick garage closed.

During the early years of the Second World War, between 1940 and 1942, Birmingham and Midland Motor Omnibus Company Limited (BMMO—Midland “Red” Motor Services) was struggling to meet demand due to vehicle shortages. Double-deck service buses were in short supply, so from March 1941 the company hire a number of Leyland Titan TD3c double-deck buses from Bolton Corporation.

Fifteen examples arrived at Midland Red on Sunday 30th March 1941, but their stay was not for long. On the night of Tuesday 8th April 1941, the City of Coventry suffered a massive air raid, and following that all fifteen examples were urgently moved to Coventry Transport on Thursday 10th April 1941.

Six of these buses returned to Midland Red on Saturday 26th April 1941, and from June were joined by an additional four examples that had previously been used by London Transport. By the end of March 1942, all had either returned to Bolton Corporation or had gone back on-hire to Coventry Transport.