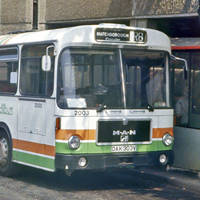 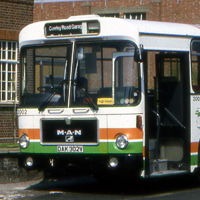 Towards the end of 1982, Midland Red (West) Limited announced that they wished to trial five articulated buses for one year at their Redditch depot. On Monday 15th November 1982, a meeting between local management and union representatives was held, and agreements were reached regarding driver training, payment and the routes such vehicles should be used on.

In January 1983, five MAN articulated on loan to the National Bus Company (NBC) arrived and all five vehicles entered service on the new “Reddibus” Service R7 and Service R8 town circular route, which had reached a ten-minute frequency by that time. These routes had evolved with the construction of the new town and make use of the extensive bus only roads in Redditch, and later became services Service 57 and Service 58 “RedLine” in the Redditch “OverGround” network. The vehicles did spend most of the time on the R7 and R8 although they sometimes strayed, even getting into Birmingham on occasions.

On entry into service at Redditch depot, all five vehicles carried their original demonstrator livery of overall white with orange and green bands along the skirts, which kicked up diagonally behind the first and third axels. The “Reddibus” MAP area brand logo was applied to the sides of the vehicles below the windows, and by fortunate coincidence the colours used on the logo matched the orange and green bands of the vehicle livery.

The building of a new bus station for Redditch town, the second of three built on the site, hindered operations during the trial period. Temporary bus stands were in use along Station Way and as a result certain routes required vehicles to turn round using a reversing manoeuvre, which is potentially quite difficult and hazardous with a 16½-metre long articulated vehicle.

Midland Red (West) Limited found the buses were popular with the passengers but vehicle reliability a problem. Obtaining spares for the MAN engines was a particularly difficult, which led to fleet number 2004 (registration number DAK304V) spending the last few months at Redditch out of service to provide parts to keep the other four buses on the road. To aid in vehicle maintenance, new facilities for articulated vehicles were built at the Plymouth Road North site of Redditch depot. These included extended vehicle inspection pits, which still remained on the site when it was sold in 2013.

At the end of the experiment, Midland Red (West) Limited decided “bendi-buses” were not for them. MAN were keen to off load the buses as they were now virtually five years old and the technology for these types of buses had moved on making the design obsolete. Midland Red (North) Limited purchased all five and put them into service from their Cannock depot as fleet numbers 1801–1805.

Certain publications list these vehicles as AB53D, while other list them as AB63T (CLM346T) and AB59T (DAK301V-304V). Photographs of these vehicles [ Example ] in service with South Yorkshire PTE and Midland Red North clearly show them to have triple doors. However, later photographs [ Example ] show them with double doors so one can only assume that this is the source of confusion. However, I am told that all five of these vehicles were infact AB53T from new and plated to carry 67 standing passengers, making a total capacity of 120, and so were sometimes quoted as AB53T 67. All five of these vehicles remained with this specification throughout their service in the UK, and after being exported to Australia (CLM346T was not exported but scrapped) they were converted to AB57D by removing the centre doors and fitting an additional four seats.