Being the last type of vehicle built by BMMO, the type S23 became quite popular with preservationists who were eager to save the last remaining examples of BMMO's unique bus building history when they were withdrawn from service in the early 1980s.

A total of 12 examples of the S23 are known to have survived after withdrawal, however some of these have since been stripped for spares and scrapped.

5919 entered service at Banbury depot in December 1968, and remained there for almost three years before moving to Malvern depot in September 1971. Malvern depot was closed in October 1976, and 5919 moved north to Wellington depot, where she stayed for the remainder of her service with Midland Red, finally being withdrawn in July 1980.

By the end of 1980, the “5479 Preservation Group” of Worcester was looking to purchase a vehicle in which their members could train to PSV driving standard, and they acquired 5919 in February 1981 for this purpose. Once her driver training duties had finished, the group decided to keep 5919 as a second restoration project and by May 1982, she had been fully restored in her original overall red BMMO livery, although she was later repainted into NBC “Poppy Red” livery.

The group renamed to the “Worcester Bus Preservation Society” in 1991, and continued to be active for many years. However, at their 2006 Annual General Meeting, the Worcester Bus Preservation Society decided it was time to wind down their operations and sell their vehicles, following dwindling support for the group. 5919 was the last of the group’s vehicles to be sold, passing to Robin Woodcock of Weymouth on 14th December 2008.

Bought by the North Cheshire Preservation Group at Warrington in March 1981, she was unfortunately scrapped in the mid‐1980s.

Bought by Birmingham and Midland Motor Omnibus Trust (“The Transport Museum”—BaMMOT), Wythall after service, used as a green coloured temporary cafe in the early 1980s, scrapped for spares by the 1990s.

5941 was the last vehicle to have both the chassis and bodywork fully constructed by Birmingham and Midland Motor Omnibus Company Limited (BMMO—Midland “Red” Motor Services). She entered service at Banbury depot in January 1970, and moved to Leamington Spa depot in February of the following year where she remained for six years. She moved to Leicester (Wigston) depot in April 1977 and finally to Nuneaton depot in June 1980, before final withdrawal in August of that year.

Because of her historical significance, MROC placed her in storage at their Central Works, Carlyle Road, with the intention that she be restored. She later passed to Birmingham and Midland Motor Omnibus Trust (“The Transport Museum”—BaMMOT), Wythall, and for many years was stored out of use “around the back” at the Museum. In 2004, she come out for a cosmetic makeover in time for the Midland Red Centenary celebrations that started in October of that year.

Fully restored and preserved by BaMMOT

This vehicle spent all her working life at Kiddeminster depot and was bought by Birmingham and Midland Motor Omnibus Trust (“The Transport Museum”—BaMMOT), Wythall, when withdrawn and has been there ever since. She was restored to full working order during the 1990s, and currently is in excellent condition, and has been used on open days and museum trips. 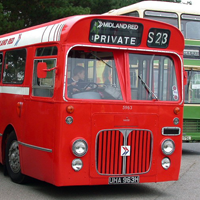 5963 passed through a number of owners after being withdrawn before being acquired by Mike James who restored it to class-6 MOT standard in NBC “Hunter” livery (although the vehicle spent the majority of its life at Rugby depot and never carried that livery). In January 2003 it was passed to Chris Hilton of Newquay, Cornwall for further preservation.

Later it passed to Wheels of Nuneaton and saw use in PCV service in NBC “Poppy Red” livery. By April 2015, Wheels were looking to sell their BMMO buses and this vehicle is looking for a new home.

This vehicle passed to Evans, Shifnal in September 1981, and is reputed to be owned by a Mr T. Thomas. The vehicle was advertised for sale on the Aston Manor Road Transport Museum website a few years ago…

BMMO S23 / Plaxton. Saw service with Midland Red and WMPTE, before joining Evans of Shifnal. Suffered some glass vandalism in the past but was given a basic coat of red some years ago. Nominally a runner – engine requires piston attention, brakes, apart from hand brake non-existent so can only be towed. Complete otherwise and whilst still restorable may be more use for rare spares, much now unobtainable.

5973 was new to BMMO at Oldbury depot in Janurary 1970. She was one of twenty-four BMMO S23s that were passed to WMPTE with the transfer of services on the 3rd December 1973, and remained in service with the WMPTE at Odlbury depot until being withdrawn in October 1980.

After being withdrawn by the WMPTE, 5973 passed to Mr Brian Waldron of Bromsgrove, and preserved in cream and blue WMPTE livery, but unfortunately she has since been destroyed in a fire. 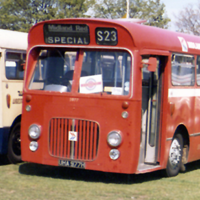 Preserved by Mr Mark Davies at Catshill, this vehicle has not been on the road for quite a few years now.

New to BMMO in March 1970 at Bearwood depot, 5981 transferred to Stourbridge depot within weeks of entering service and remained at that depot for the remainder of her service life. On 3rd December 1973, control of Stourbridge depot, its staff and vehicles, passed to WMPTE and like all the vehicles to come under WMPTE control, 5981 was later repainted into the WMPTE livery of cream and blue.

5981 was one of the last two BMMO built vehicles to be withdrawn from service by the WMPTE, being withdrawn in January 1981. She originally passed to the Stourbridge S23 group for preservation, and now resides at Birmingham and Midland Motor Omnibus Trust (“The Transport Museum”—BaMMOT), Wythall.

Broken for spares and Scrapped

Passed after withdrawal to Evans at Shifnal, the remains were purchased by the Worcester Bus Preservation Society (WBPS) for spares.

Note: 5991 had its bodywork finished by Plaxton, the last vehicle to be fully constructed by BMMO was F/No: 5941.