Only two BMMO type S17 vehicles are known to have survived.

BMMO S17 number 5479 (registration number 6479HA) first entered service with BMMO at Coalville depot in January 1964. Within a month, she moved to the former “Browns Blue” depot at Markfield, which had been acquired by BMMO with the business of Browns Blue in March of the previous year. She remained at Markfield until in June 1968 when the depot closed, and then she returned to Coalville depot, which took over all the Markfield operations.

In 1971, she saw about 3 months service at both Hinkley depot and Swadlincote depot, before settling at Hinkley depot where she remained until October 1978. She then returned to Swadlincote depot for about 4 months before moving to Nuneaton depot, and finally becoming an Engineering float vehicle in August 1979.

5479 was withdrawn from service with MROC in November 1979, after almost 16 years service. Her final duty was as an engineering float vehicle working from Shrewsbury depot, and she was the last BMMO S17 withdrawn by the company. In February 1980, she passed to the “5479 Preservation Group” which had been formed in late 1979 with the sole aim to purchase and restore her. Over the following 12 months, the group fully restored her to original condition, with one-man operation equipment removed and carrying overall red BMMO livery with gold “Midland” fleet names. In the early 1990s, the 5479 Preservation Group had expanded and by this time owned several BMMO vehicles, so renamed to the Worcester Bus Preservation Society.

At their 2006 Annual General Meeting, the Worcester Bus Preservation Society decided it was time to wind down their operations and sell their vehicles, following dwindling support for the group. The first vehicle sold was 5479 and on 22nd October 2006, she passed to Aston Manor Road Transport Museum in Birmingham, after almost 27 years with the group. For her final journey with the group she retraced the old service 144 route from Malvern Wells to Birmingham via Worcester, Droitwich and Bromsgrove, followed closely behind by one of the groups other vehicles, BMMO S22 number 5901. Unfortunately the day didn’t run quite as smoothly as planned, as on arriving at their final destination a long serving member of the group, Gordon Smith, started to reverse 5479 into the building and collided with the side of the museum, denting that, braking two rear lights and damaging the trim and a panel strap!

Restored and Preserved by BaMMOT 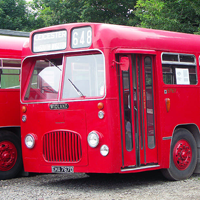 5767 was one of the last BMMO S17 vehicles made, being built towards the end of the third and final batch. As with most of this batch, bodywork was finished by Plaxton to BMMO’s design, and she entering service at Sandacre Street depot, Leicester, in September 1966 and moved to Leicester (Wigston) depot in October 1967. She remained at Wigston for the rest of her working life, and was finally withdrawn in September 1979, being one of the last of the type left in service. After withdrawal, she passed to Birmingham and Midland Motor Omnibus Trust (“The Transport Museum”—BaMMOT), Wythall, and has remained with them ever since.

In 1993, the museum began an overhaul and restoration which took around six years to complete, returning her to original condition.