Only two BMMO S15 dual-purpose buses are known to have survived. A third exampled, fleet number 5091, was going to be converted to a caravan was unfortunately scrapped in the early 1990s. 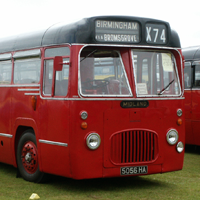 5056 has led quite a charmed existence after use by BMMO. She was withdrawn from service with BMMO in October 1972, and passed via Hudley (dealer) to Fletcher (unknown contractor) in December 1972. She was then resold to a contractor called Bardolin, passing to the Nottingham Boys Club in September 1973. She was sold in 1982 to Messrs Wagstaff and Cooksey, and has been near enough totally rebuilt and overhauled since then, receiving a gearbox taken from a BMMO C5 coach, new engine, and an original set of S15 dual purpose bucket seats. She is often to be seen around the Midlands and further afield, and she goes “very well” apparently... probably due to the fact that the new engine is a BMMO 10½-litre unit which allows very conmfortable cruising speeds of 60mph plus!

5073 was the last of the bus-converted BMMO S15 to be withdrawn, along with 5055, in September 1974. She was initially sold in late 1974 to Messrs Simm and Mansell of Worcester, then to Birmingham and Midland Motor Omnibus Trust (“The Transport Museum”—BaMMOT), Wythall in November 1977. Unfortunately she has retained her bus seats which she recieved during downgrading to bus status in the early seventies, but will no doubt be restored to buckets seats in the future. 5073 has recently obtained a class IV MOT certificate, and is used extensively on special tours and BaMMOT shuttle services.