In 1909, London General Omnibus Company (LGOC) started building omnibuses, initially only for their own use, at a site in Walthamstow, London. The company was taken over by Underground Electric Railways Company of London Limited (UERL) in 1912, and at that time the vehicle manufacturing concerns were separated to form a new company, the Associated Equipment Company, or AEC as it became commonly know. In 1929, AEC introduced their new double-deck bus chassis, the Regent, which continued in production in various forms until 1968.

Before the Second World War, Birmingham and Midland Motor Omnibus Company Limited (BMMO—Midland “Red” Motor Services) had not operated any AEC vehicles, and by the time war was declared their entire fleet consisted of SOS vehicles built in-house to their own design, although some of these did have AEC 7.7-litre diesel engines. Vehicle production at BMMO stopped in 1940 by order of The Ministry of War Transport, and by the end of 1941 the company was struggling from a shortage of service vehicles, especially double-deck buses.

After the war, BMMO placed an order for one-hundred AEC Regent II double-deck buses to supplement their own vehicle production, but these where heavily delayed and not entirely successful, and a further order was cancelled. The only other examples to enter the BMMO fleet were acquired second-hand with the operations of companies taken over by BMMO, and these were either not operated or withdrawn within weeks of being acquired.

On Hire from London Transport

In 1930 and 1931, Thomas Tilling Limited acquired a large number of new AEC Regent petrol-engined double-deck buses fitted with H27/25RO (rear-entrance, open-staircase) Thomas Tilling bodywork. On Thursday 13th April 1933, the London Passenger Transport Board (LPTB) was formed by act of parliament and after protracted negotiations over compensation, on Sunday 1st October 1933, the entire South London fleet of Thomas Tilling Limited, consisting of 328 vehicles including 191 AEC Regents, passed to LPTB as part of a compulsory purchase order.

The AEC Regents became part of the London Transport class ST, and continued in service until the start of the Second World War, when most were placed in storage due to petrol rationing. While in storage, some were damaged beyond repair by bombing raids during the London Blitz, but as the war progressed the surviving vehicles were put back into service to replace other war damaged vehicles, and many were hired out to other operators who were struggling with vehicle shortages.

Nine examples of the ex-Tilling class ST AEC Regents went on long-term hire to Birmingham and Midland Motor Omnibus Company Limited (BMMO—Midland “Red” Motor Services) from December 1941, these were London Transport fleet numbers ST905, ST920, ST922, ST931, ST935–936, ST941, ST951 and ST959. The vehicles were absorbed into the regular BMMO fleet, being operated and maintained by BMMO as if they were their own vehicles, but were not allocated BMMO asset numbers or fleet numbers when they were introduced in 1944. Two examples, ST931 and ST941 (registration numbers GK1007 and GK1017), were operated by BMMO’s subsidiary Stratford-upon-Avon Blue Motors Limited (Stratford Blue) for short periods during 1942 and 1943.

All of these vehicles returned to London Transport in October 1944, and like many of the examples hired to other operators they returned to service in London and were finally withdrawn in the late 1940s. One example, fleet number ST922 (registration number GJ2098), has survived to this day and is now a fully restored and operational exhibit at the Cobham Bus Museum.

Fourteen AEC Regent class ST double-deck buses on long-term hire to Birmingham and Midland Motor Omnibus Company Limited (BMMO—Midland “Red” Motor Services) from July, November or December 1942 to August or October 1944. These vehicles had H28/29R bodywork, and had been new to London General Omnibus Company Lmited in 1930 and 1931.

In 1942, Birmingham and Midland Motor Omnibus Company Limited (BMMO—Midland “Red” Motor Services) acquired six new AEC Regent O661/19 double-deck buses. These had originally been ordered by Coventry Corporation, but had been “frozen” by The Ministry of War Transport at the start of the war, before production had been finished. On being “un-frozen” by The Ministry in late 1941, production was finished to pre-war specification and the vehicles were assigned to BMMO. They were fitted with H31/28R Brush bodywork and, unlike the vehicles on hire from London Transport, they also had the 7.7-litre AEC diesel engine that was familiar to BMMO from use in many of their SOS vehicles.

The buses entered service at Wolverhampton depot in early 1942, but were soon replaced by a number of more powerful Leyland TD7 that had also been allocated to the company by The Ministry of War Transport. They moved to Harts Hill depot and spent almost all of their working live on the busy Dudley to Stourbridge group of services. In March 1944, the vehicles recieved fleet numbers 2441–2446, and during 1951 all six examples had their bodywork rebuilt by Aero & Engineering (Merseyside) Limited of Hooton. 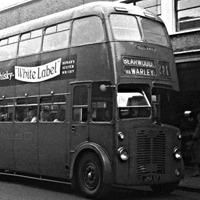 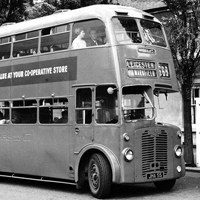 Throughout the war period production of Birmingham and Midland Motor Omnibus Company Limited (BMMO—Midland “Red” Motor Services) vehicles had been suspended, and the existing pre-war fleet had been worked hard with restricted maintenance, so by the end of 1945 was in desperate need of renewal. By early 1946, BMMO had been given permission to restart vehicle production, but at this time manufacturing capacity was still hindered by post-war labour and material shortages so the company decided to concentrate all of their resources at Central Works in producing single-deck buses only. To save time, much needed new double-deck buses would be purchased from outside manufactures for the first time since the 1920s.

An order for one-hundred double-deck buses was placed, to be built on the AEC Regent II O661/20 chassis with AEC 7.7-litre engine and crash gearbox. Bodywork was to BMMO’s own concealed radiator design, based on the BMMO D1 prototype, with open rear platform and H30/26R seating layout. Both Brush and Metropolitan-Cammell Carriage and Wagon were commissioned to build the bodywork on fifty examples each. This class of vehicle was given the Midland Red type code AD2, and the unique chassis designation O661/20 by the manufacture AEC as they were modified from the standard Regent II chassis to accept the closed radiator bodywork.

By the end of 1946, the AEC chassis were ready but due to ongoing post-war shortages and rationing the bodywork manufactures were not able to honour their end of the deal. Brush was the first to start construction, and the first examples were delivered from February 1948, entering service at Bearwood depot, Cradley Heath depot, and Stourbridge depot on Saturday 8th May 1948, to convert the busy Service 130 between Birmingham, Halesowen and Stourbridge to double-deck working.

The first Metropolitan-Cammell example to arrive, fleet number 3160 (JHA61), was not delivered until August 1949, with the rest following from March 1950. By this time, not only had BMMO managed to start production of their own design of double-deck bus, the BMMO D5, but almost the entire batch of one-hundred BMMO-built vehicles had already entered service. While the BMMO D5 was built to the new maximum permitted width of 8′ 0″, the AD2 Regents were built on chassis that were by then almost four years old to the previous width restriction of 7′ 6″ and were outdated before production had finished.

The last of the Metropolitan-Cammell AEC Regents finally entered service at Leamington Spa depot in December 1950, approximately five years after the order had been placed and three months after the first examples of the second batch of post-war BMMO double-deck bus, BMMO D5B, had entered service.

The AD2 class had heavy bodywork giving an unladen weight of just over 7 tons 10 cwt., and the 7.7-litre AEC engine struggled to cope. Initially these vehicles were used to convert busy routes in the Birmingham and Black-Country area to double-deck working, however their lack of power saw many of them moved to quieter depots for use on more rural services from 1950.

In the late 1940s, BMMO placed an order for a further eight AEC Regent double-deck buses. These were to be built on the more advanced RT-type AEC Regent III chassis, which featured air-operated pre-selective gearboxes and air brakes. They were to have been assigned fleet numbers 3300–3307, and were expected to be allocated to Stourbridge depot and Worcester (Padmore Street) depot.

During 1948, BMMO cancelled the order for these vehicles. It is unclear why the company changed their minds, but by this time deliveries of the AD2 type had finally started to arrive and the type were found to be underpowered, so maybe BMMO decided they would not be suitable. Also, the previous order had faced long delayed (and was still another two years away from being fully completed) and BMMO were now ready to start production of their own double-deck vehicle design, the BMMO D5, so vehicles from outside manufactures were not needed quite so urgently.

The unused AD3 fleet numbers 3300–3307 were later assigned to the first examples of the BMMO C1 coaches, which entered service from April 1949, but following the cancellation of the order the “D3” type code was never used.