In 1928, the Birmingham and Midland Motor Omnibus Company Limited (BMMO—Midland “Red” Motor Services) decided to concentrate their entire fleet on single-deck designs. By the end of the following year, the last of the petrol-electric open-top Tilling-Steven FS double-deck buses had been withdrawn, leaving the fleet without any double-deck vehicles of any type. However, this decision proved to be short-sighted and it was soon realised that double-deck buses would be needed to meet the demand of the growing network of services in the industrial Black Country area.

In 1931, BMMO introduced a new “in-house” design of double-deck bus, the SOS “DD”. The basic design of the type seems unremarkable by today’s standards, being a traditional front engine half-cab double-deck bus, with rear staircase and open-platform rear entrance. However to put things into context, this was the first double-deck bus operated by BMMO since the withdrawal of the petrol-electric open-top Tilling-Steven FS type only about two years earlier, and thus was the first double-deck design operated to feature pneumatic tyres, a conventional gearbox transmission, and an enclosed upper deck with windows and a roof. Thus it can be said that this design was the first of the “modern-era” of double-deck buses to be operated by the company, although when compared with class-leading single-deck buses being built by BMMO at the time, it was nothing unusual.

A prototype was built by BMMO in 1931, followed by a batch of fifty production vehicles during 1932 and 1933. This new class of vehicle was given the designation SOS “DD” (“Double Decker”), but this was officially changed to “DD(RE)” in 1934, “Double Decker (Rear Entrance)”, when deliveries of front-entrance examples started. Rear entrance buses were obviously not favoured by the BMMO management team as these were the only examples built for their own use, and production was changed to front-entrance designs with the introduction of the SOS “DD(FE)” from 1933.

By the early 1940s, the class were commonly being called “REDD” but although this was never an official name, it is the one most often used to this day. Although no more rear-entrance buses were built by BMMO for their own use until the post-war era, BMMO did build a further nineteen examples for Potteries Motor Traction Company Limited (“PMT”), Stoke-on-Trent, from 1932 to 1934.

The first double-deck bus chassis to be built by BMMO (chassis number BMO.1541) was the prototype SOS “DD” in 1931. It was fitted with the standard BMMO six-cylinder RR 2LB petrol engine, and a double-deck version of the “Silent 3rd” gearbox. The chassis had a low-swept frame with a wheelbase of 15′ 7″ (approximately 4m 75cm) and overall length of 25′ 3″ (approximately 7m 69½cm).

Bodywork was by Short Brothers and built to wooden-framed six-bay construction with a sloping front upper-deck that did not extend over the driver’s cab. Seating was for 48 people, made up of 22 seats on the upper-deck and 26 seats on the lower deck.

The prototype was later extensively rebuilt but visually changed very little. It remained in service with the company until 1948, giving 17-years service which is quite impressive for a prototype. Most of this time was at Bearwood depot, but it was moved to Leicester (Southgates Street) depot, between 1940 and 1946. 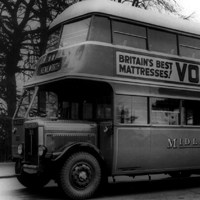 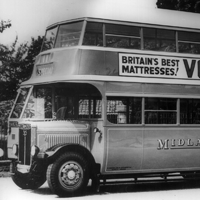 A production batch of fifty vehicles started to enter service during 1932, and although the mechanics remained unchanged from the prototype, the bodywork was changed significantly. The wheelbase on production vehicles was increased to 16′ 1½″ (approximately 4m 91½cm) with an overall length of 25′ 11″ (approximately 7m 90cm). Bodywork was to five-bay construction and the upper-deck was extended over the top of the driver’s cab, allowing an extra row of seats, increasing the capacity from 48 to 52 (26 seats on each deck).

Bodywork was supplied by four different coachbuilders and until the late 1930s, allocations for these vehicles tended to be in groups that were dependant on the bodywork builder.

By 1940, the entire batch of fifty vehicles had been moved to depots in the Leicester area and remained here throughout the war period. During the war years the need to transport large numbers of people clearly took priority over comfort, and therefore between 1940 and 1942 the entire batch had the seating capacity on the upper-deck increased by the addition of three extra seats. After the war some examples were moved to other depots, but most saw out their final years in the Leicester area.

Four examples delivered to Potteries Motor Traction Company Limited (“PMT”), Stoke-on-Trent, in October 1932, for use on their Burslem to Tunstall and Longton to Hanley services. All four were fitted with L26/26R Brush low-bridge bodywork from new, and remained in service with PMT throughout the 1930s and the Second World War, with the last example surviving until 1949.