In 1935, Birmingham and Midland Motor Omnibus Company Limited (BMMO—Midland “Red” Motor Services) built an experimental chassis known as the SOS “REC” (“Rear Engined Coach”), followed by three additional examples of the same class in 1936. As the name suggests these featured the engine mounted at the very back of the vehicle, behind the rear axle, and it was claimed these were the first in Briton with this layout. This new layout freed vital space at the front of the vehicle and allowed the passenger entrance and driver's seat to be located ahead of the front axle. Today this layout is standard practice on almost all bus and coach designs, but in the mid-1930s it was considered a revolution and highlights the brilliance and foresight of BMMO's design team, headed by Chief Engineer Mr LG Wyndham Shire.

Despite the word “Coach” being in the name, only one example from the four carried coach bodywork with the other three receiving front-entrance bus bodywork, all built in-house by BMMO at Central Works (“Carlyle”). All had a petrol engine located transversely behind the rear axle with two radiators, one on each side of the vehicle. Two engine types were tested with the 5.580-litre petrol BRR unit being fitted to the 1935 vehicle, and the larger 6.373-litre petrol RR2LB engine being fitted to the three vehicles built in 1936, although the two 1936 vehicles with bus bodywork later recieved the smaller engine.

After testing, all four examples operated in service until shortly-after the outbreak of the Second World War. In April 1940, Mr LG Wyndham Shire retired and was replaced as Chief Engineer by Mr DM Sinclair, who clearly had differing views on future mechanical layout of buses. All four prototypes were withdrawn and dismantled shortly after Mr Sinclair's appointment, but later reappeared heavily modified as prototypes for the mid-mounted under-floor engine layout that would be favoured when vehicle production resumed in 1946. 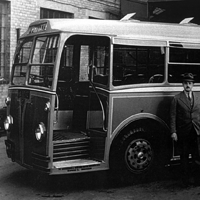 The first SOS “REC” prototype, built in early-1935, was chassis number BMO.1947 and registration number BHA1. It was fitted with 42-seat bus bodywork (BMMO body number BB.2449) which had the passenger entrance in an unorthodox position at the very front of the vehicle, ahead of the axle. The engine, a BRR 5.580-litre petrol unit, was modified with hydraulic throttle operation to allow operation in it's unconventional location behind the rear axle, and transmission was via a Cotal epicyclic gearbox with Daimler fluid flywheel, thus giving an early example of a fully-automatic, bus.

The vehicle was formally launched and demonstrated to the press during May 1935, and testing continued until February 1936, when it entered service at Bearwood depot. The vehicle was re-seated to 40-seats before entering service, but otherwise the specification remained unchanged until it was withdrawn and dismantled in 1940.

In 1941 the chassis from BHA1 was the first of the four SOS “REC” class to be rebuilt as a prototype for a new under-floor engine layout (see below). The bodywork from this vehicle was also re-used, although it was heavily re-built and re-styled with a sloped roof design, which was not considered to be entirely successful aesthetically. From 1945, BMMO introduced a new system to classify their vehicles, and BHA1 became the sole member of the BMMO S1 class.

In 1936 three additional experimental prototype vehicles were built with chassis numbers BMO.2395–2397 and registration numbers CHA1–CHA3, and all three were new with the larger 6.373-litre petrol RR2LB engine. The first vehicle, registration number CHA1, was fitted from new with centre-entrance 32-seat coach bodywork built in-house by BMMO (BMMO body number C.189). Construction was complete in 1936, and the vehicle joined BHA1 in service at Bearwood depot.

After being withdrawn and dismantled in 1940, the bodywork from this vehicle was sold to AT Hardwick of Bilston, who fitted it to Leyland Tiger registration number KF4726. Like BHA1, the chassis number, registration number and BMMO asset number were re-used to circumvent wartime regulations on new vehicle construction (see below), and a new under-floor prototype single-deck bus was built in 1942 with registration number CHA1. This became known as the BMMO S2 from 1945.

These other two 1936 built vehicles, registration numbers CHA2–3, were fitted with identical 40-seat bus bodywork, which was very similar in style to the bodywork fitted to the first prototype (registration number BHA1), although there were a few detail changes. The most notably change was the fitting of significantly larger ventilated panels at the rear on both sides. Clearly the earlier examples had problems providing the engine with cool air, which is a problem that is not uncommon with rear-engine buses, even today. The larger ventilation panel also necessitated the moving of the off-side emergency exit from its location at the rear corner on BHA1 to a new position approximately halfway along the vehicle on CHA2 and CHA3.

While all three of these vehicles were fitted with the larger 6.373-litre RR2LB petrol engine from new, both CHA2 and CHA3 received the smaller 5.580-litre BRR petrol engine before, or soon after, entering service. CHA2 entered service in late-1936, and CHA3 in early-1937, both at Bearwood depot, although CHA2 was later used in service at Birmingham (Digbeth) depot. 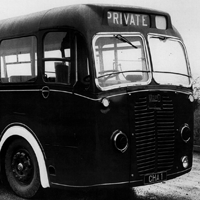 During the wartime period construction of new vehicles was forbidden by order of the Government, but BMMO circumvented this regulation by using the four dismantled SOS “REC” chassis frames as the base for four new bus prototypes built to a design favoured by the new Chief Engineer, Mr DM Sinclair, with mid-mounted, under-floor diesel engines.

Thus, on paper at least, the four SOS “REC” were modified and re-entered service between 1941 and 1944. In reality the wartime prototypes were almost entirely new and only parts the chassis frames, which were heavily modified to house the new engine under the floor, were carried over. It has been suggested that because of the extent of the modifications required, even the chassis frames were new and only the chassis numbers were re-used, but I think wartime rationing of steel would have made this unlikely.

The wartime prototypes were the first vehicles to receive the new BMMO system of vehicle type classification in 1945, becoming known as BMMO S1–S4. All remained in service until 1957/8.

BMMO are credited with a number of significant innovations in bus design, and the SOS “REC” rightly deserves to be listed among their great achievements, however history has largely forgotten these vehicles, probably due to their very short life-span. The basic design and layout of these vehicles was way ahead of their time, and eighty years later almost all modern single-deck buses are now being built with this front-entrance, rear-engine layout.

The SOS “REC” design was found to be quiet and smooth, with the rear-engine layout isolating occupants from mechanical noise. The layout also gave better weight distribution which made the vehicle more stable and gave lighter steering, and the shorter wheelbase improved manoeuvrability.

As with all prototypes there were issues during development, most notably these were the ingress of road dirt into the engine compartment, and providing sufficient cooling to the engine. The latter was clearly identified early as both CHA2 and CHA3 had much larger ventilation panels than the first two. I have not found documentation to say how badly the engineers struggled with the cooling issues, but many years later BMMO wished to avoid the rear-engine layout with their BMMO D10 prototypes because of cooling problems, so I suspect the they may played down the extent of the problem in public to avoid embarrassment.

Vehicle production in general came to a sudden halt by order of the Government following the outbreak of the Second World War, and in April 1940 the BMMO Chief Engineer and vehicle designer, Mr LG Wyndham Shire, retired at the relatively early age of 55. It has been suggested that the wartime restrictions prompted his early retirement as he was no longer in a position progress his designs, but either way his successor Mr DM Sinclair chose not to continue development and favoured his own mid-mounted under-floor engine designs.

It is highly likely this class of vehicle, or one based on its design, would have entered into production had the war not intervened, and if Mr Wyndham Shire had still been with the company pushing his revolutionary designs forward. However, it could also be argued that these buses were too advanced for their time and an intermediate solution was required…

These vehicles gained much more notoriety in their post-war guise as under-floor engine prototypes. While the BMMO S1 (registration number BHA1) may have been unloved because of the awkward bodywork styling there can be no doubt that the chassis layout, which further evolved with the other three prototypes, was extremely successful for BMMO. The basic chassis layout developed with these prototypes would be subsequently used for every single production single-deck bus and coach built by BMMO from the time production resumed after the war until vehicle production ended in 1970.

These days the under-floor layout has been made obsolete because of the need for low-floor disabled access vehicles, so progress has eventually favoured the previous SOS “REC” layout. But in an age when disabled access was not a priority the under-floor solution had all the space saving advantages of the rear-engine design in a package that didn't suffer from cooling problems or require expensive and complex two-pedal gearboxes.

The bodywork styling for the rebuilt BHA1 may have been a bit questionable, but thankfully the other three prototypes (registration numbers CHA1–CHA3) were not so harshly treated, and would inspire the look of all BMMO single-deck production buses until the BMMO S12 of 1951. Everyone has their own opinion, but the author of this website believes the rugged simplicity of the BMMO S6–S12 buses were the most attractive made by BMMO.

The rear-engine layout of the SOS “REC” showed the world of 1935 what the future would look like, and the under-floor engine layout of the BMMO S1–S4 was the right design for the time, and provided the perfect stop-gap while everyone waited for the future to arrive. Both designs deserve their place in the bus history books and it's quite amazing that BHA1, backed up by CHA1–CHA3, was at the cutting edge in both cases.