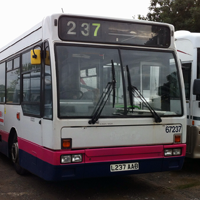 Dennis Lance fleet number 237 (registration number L237 AAB) was numerically the last Lance in the batch of thirty-seven that were new to Midland Red West Limited in the summer of 1994 for use at their Digbeth depot in Birmingham. Within a year she had been reallocated to Kidderminster depot, and went on to lead quite a nomadic life with the company, being reallocated a number of times between Hereford, Kidderminster, Redditch and Worcester depots.

On 13th March 2004, the company renumbered their entire fleet in line with the new FirstGroup national fleet numbering system, and at this time 237 became fleet number 67237. By September 2006, she was the only vehicle from the batch to still carry the original Midland Red West livery of red and cream, but by the end of October she had finally been repainted to FirstGroup “Barbie3” livery.

Soon after being withdrawn she passed to Carl Wigmore of Hereford for preservation. Work is currently underway to restore the vehicle to its original condition as used by Midland Red West Limited at Digbeth depot, but work has been slow due to the need to remove the floor to access the chassis and address corrosion issues. However, work is continuing and Carl hopes to have her back on the road by the end of 2015. 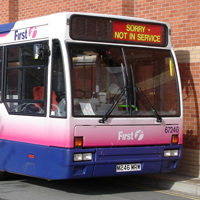 Dennis Lance 246 (registration number M246 MRW) was one of a batch of nineteen vehicles bought by Midland Red West Limited in 1995 for use at their Worcester depot. Vehicles from this batch had the distinction of having the letters “MRW” in their registration numbers, and this was the only time the company has ever indulged in cherished registration numbers.

This vehicle spent most of its first twelve years of service at Worcester depot and during that time became the first vehicle at the depot to be repainted to FirstGroup livery. On Wednesday 10th October 2001, she returned from the paint shop in “Barbie2” livery (without the pink fading vinyl) and was immediately sent out on a service 144 to Birmingham with MidlandRed.net webmaster, Adam Harber, at the wheel. The livery was finally finished some six weeks later on 3rd December when the pink fading vinyl and fitted.

In December 2002, First Midland Red started operating a new “Night Bus”service. M246MRW was one of several Lances to be fitted with CCTV for the new services, and also received an updated destination blind at the same time. The Night Bus services were not successful and were soon withdrawn. The CCTV equipment remained fitted to the vehicles but were not used.

On 13th March 2004, the company renumbered their entire fleet in line with the new FirstGroup national fleet numbering system and 246 became fleet number 67246. Shortly afterwards she moved to Hereford depot but her stay was not long and she returned to Worcester within a few weeks. In February 2007, she left Worcester depot for the last time and moved to Redditch depot. While there was again repainted, this time to FirstGroup “Barbie3” livery. Other than a brief spell at Kidderminster depot, 67246 spent the rest of its service life at Redditch and was still there when the depot was sold to Rotala Plc on 3rd March 2013. The operations of Kidderminster and Redditch were taken over by Rotala’s subsidiary company, Diamond Bus Company Limited, and 67246 was renumbered to 31509 in the Diamond fleet.

Diamond quickly withdrew most of the vehicles acquired with Kidderminster and Redditch depots and many didn’t see service with their new owner, but M246MRW was used for a few days at Kidderminster depot before being withdrawn. Within a few weeks she passed to Steve Peters of Redditch for preservation, her current status is unknown.

Photographs show the vehicle while still in service with First Midland Red. Preserved photographs are not available at time of writing.