All Dennis Lance buses new to Midland Red West Limited entered service in standard Midland Red West livery of red bodywork with cream roof name “Midland Red West” along both sides above the windows, and the company “Wyvern” logo at the front below the windscreen and in the rear corners above the side windows. The only exception to this was fleet number 249 (registration number M249MRW, later renumbered to fleet number 67249), which entered service at Worcester (Padmore Street) depot in white livery with overall advertising for Crowngate Shopping Centre.

The L-reg examples, fleet numbers 201–238 inc., that entered service at Birmingham (Digbeth) depot from April 1994 also carried the Badgerline group logo from new. This was displayed at the bottom of the vehicle behind the rear axel; however, this logo was not used on the second batch of vehicles that entered service at Worcester (Padmore Street) depot in 1995.

In 1997, FirstBus formed and the old Badgerline and Wyvern logos started to disappear from these vehicles. At first, a number of examples carried the fleet name “Midland Red West” in a new typeface, with the “First” logo, across the front and above the door. This was quite short lived and soon all vehicles adopted the group branding of having the group logo and name “First” shown across the front and above the doors, with the local identity “Midland Red” shown in smaller lettering on the sides. In line with group policy, the local Midland Red identity was removed from vehicles in 2001 and 2002.

By mid-2006, the company had repainted all of the Lances into corporate FirstGroup livery and the traditional red and cream livery was no longer used. 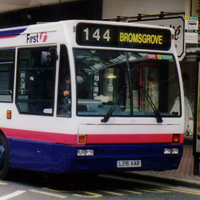 In April 2001, FirstGroup announced a new livery for all older vehicles within the group. At the time First Midland Red were in the process of carring out a full body service to fleet number 216 (registration number L216AAB, later renumbered to fleet number 67216), which involved replacing all damaged pannels (most of them!) and sending the vehicle for a full re-paint. This vehicle thus became the First, and for several months the only, First Midland Red Dennis Lance to carry the new FirstGroup “Barbie2 livery.

However, due to a shortage of the pink fade vinyl that is used with the Barbie2 livery an interim livery was created by painting a solid pink stripe were the fade should be fitted. Vehicles that carried this interim livery were not fitted with company logos of other markings.

By the autumn of 2001, the fading pink vinyl that is required on the FirstGroup “Barbie2” livery had become widely available, so First Midland Red started to upgrade vehicles that had previously carried the Interim Barbie2 livery to the full version. Vehicles repainted from this time all recieveing the fading pink vinal at the same time as being repainted.

Certain Dennis Lance buses that carry the FirstGroup “Barbie2” livery have also been fitted with Pink “Birmingham Shuttle” Route Branding for use on the service 146 between Redditch and Birmingham City Centre.

By September 2004, FirstGroup had abandoned this livery, presumably due to the high cost of the pink fading vinyl. Vehicles repainted after this date received a new standard group corporate “Barbie3” livery. 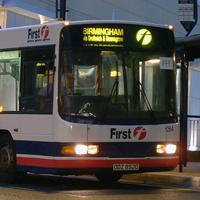 When these vehicles were passed to First Midland Red it was believed they would be repainted into “Barbie2” livery, however this was not the case and they entered service at Worcester (Padmore Street) depot in the Rail Link livery but with the route branding removed. In December 2006, First Midland Red started a program of overhauling these vehicles in an attempt to extend their service life. On overhaul, vehicles that still had double doors were converted to single door, and all vehicles were repainted into FitstGroup “Barbie3” livery. By the end of 2007, all of the Pathfinder Lances had been overhauled in this manor and repainted.

By September 2004, FirstGroup had abandoned their Barbie2 livery, presumably due to the high cost of the pink fading vinyl. Vehicles repainted after this date received a new “Barbie3” livery, which was simular to the standard group corporate “Barbie” livery, but had a shorter swipe on the side.

The first Dennis Lances operated by First Midland Red to carry this livery were fleet numbers 67114 and 67231 (registration numbers L824HCY and L231AAB).

In 2005, First Midland Red Buses Limited won a 5-year contract from The Green Transport Company to operate a number of school services, and in the Easter school holidays of the following year they repainted three vehicles, including Dennis Lance 67241 (registration number M241MRW) overall green livery with red skirts and “The Green Bus” branding. 67241 re-entered service at Redditch depot in the new livery on Monday 24th April 2006.

The livery was only carried for two and half years, and the vehicle was repainted to standard FirstGroup “Barbie 3” livery in September 2008.

The other two vehicles to be repainted to this livery were Volvo B10M double-deck buses, fleet numbers 38123 and 38124 (registration numbers K123URP and K124URP), and these vehicles re-entered service in their new livery at Kidderminster depot at the same time.

Shortly after entering service at Redditch all six vehicles were fitted with pink service 146 “Birmingham Shuttle” route branding, showing a large picture of the Birmingham sky line on each side and a 20 minute service frequency.

Only a few months after the vehicles recieved this route branding, the service frequency was cut back to run every hour and the surplus vehicle found use on other services. The route branding was later removed on some of these vehicles, but only partly removed on others. 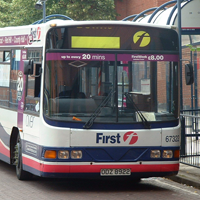 On 5th July 2004, First Midland Red launch their “Overground” service branding in Worcester City. In preparation, a week before this on 27th June 2004, Dennis Lance SLF fleet number 67322 (registration number ODZ8922) was fitted with Purple route branding for Worcester Overground service 28. Being a week before the Overground services were due to start this resulted in the vehicles advertising tickets for sale that were not yet available.

By the time the Overground services had started the following week, First Midland Red had decided that they wanted to concentrate their fleet of SLF Lance vehicles on Overground service 33. Therefore, less than a week after receiving the purple branding, on 4th July 2004, fleet number 67322 was refitted with green branding for that service.

On the same day fleet number 67256, a stepped entrance Dennis Lance with Plaxton Verde bodywork, had its green route branding removed and replaced with the purple branding for Worcester Overground service 28. This branding remained unchanged on this vehicle for just under a year until the week before service 28 was withdrawn on 12th June 2005. At this time, 67256 returned to standard FirstGroup “Barbie2” livery without any branding. 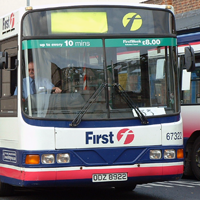 On 5th July 2004, First Midland Red launch their “OverGround” service branding in Worcester City, which involved several Dennis Lance buses being fitted with colour coded route branding. The branding was fitted to vehicles on the two Sundays leading up to the launch of services (27th June and 4th July 2004), and thus again several vehicles carried service branding a new ticket prices a week before the tickets were available. 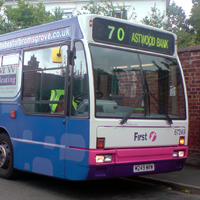 In August 1995, M249MRW was one of the last Dennis Lances acquired new by Midland Red West to enter into service, as fleet number 249, and originally carried all over advertising for “Crowngate Shopping Centre ” in Worcester. The advertising contract between First Midland Red and Crowngate expired around the beginning of 2000, however First Midland Red did not get around to having 249 repainted in the then standard red and cream bus livery until early July 2000, (returned to service in red and cream livery on 13th July 2000), so Crowngate had around 6 months of free advertising!

249 was repainted to FirstGroup Barbie2 livery, and recieved Pink “Birmingham Shuttle” Route Branding for use on the service 146 between Redditch and Birmingham City Centre, in April 2003. She was renumbered to fleet number 67249 on 13th March 2004.

On 15th May 2009, while in service at Redditch depot, 67249 recieved overall advertising for “Best of Bromsgrove”, and with this advertising was used mostly on service 143.