In 1972, NBC announced that they had decided to emphasise its national identity. To achieve this, the NBC “double-N” logo was introduced, and liveries were standardised across all the companies in the group. All coaches in the group were repainted to overall white and carried the “National” fleetname in large lettering with the local company name shown in small lettering. Buses and other vehicles kept their existing livery colour, which for BMMO was overall red, and the company name and NBC logo was shown in a standardised style on the sides.

The NBC livery used by Midland Red for their buses was known as “Poppy Red”, and repainting of all buses in the fleet started in August 1972.

On the 3rd December 1973, WMPTE took control of 170 services from BMMO. To operate these services six BMMO depots and staff, plus 413 vehicles, were transferred to the WMPTE. Vehicles that were transfered to the PTE were repainted into the standard WMPTE livery of dark blue and cream, carrying “West Midlands” fleetname.

Midland Red repainted the majority of the vehicles passed to WMPTE into cream and blue livery at their Central Works, Carlyle Road, as part of a four-year contract. Before being repainted, vehicles ran in their original overall red BMMO livery but with WMPTE “West Midlands” fleet names and logos. From June 1974, WMPTE repainted several examples in-house at their Walsall paint shop; these differed from those repainted by Midland Red in having cream fleet numbers on the lower panels instead of black numbers above the lowers saloon windows.

Note: It is not intended for this website to chart the history of the West Midlands Passenger Transport Executive (WMPTE); however, a small part of that company’s history has been included on this page to illustrate how it affected the history of the Birmingham and Midland Motor Omnibus Company Limited (BMMO—Midland “Red” Motor Services). For more information about the transfer of assets and services to the West Midlands Passenger Transport Executive (WMPTE) on the 3rd December 1973, see the “Transfer of BMMO Services and Assets to the West Midlands PTE” page in the of this website. 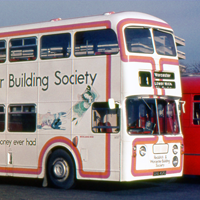 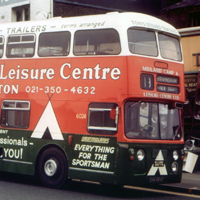 6024 was repainted into overall advertising for “Midland Leisure Centre” by BMMO in 1972, while in service at Birmingham (Digbeth) depot.

On 3rd December 1973, the vehicle was one of 65 type DD12 Daimlers to pass to WMPTE. At this time, the vehicle moved to Sutton Coldfield depot and entered service with WMPTE still carrying the overall advertising. The advertising was replaced by standard WMPTE livery in early 1974.