Alexander Dennis was formed as TransBus International in January 2001, after the merger of Walter Alexander Coachbuilders owned by the Mayflower Corporation, Dennis Chassis, and Plaxton. TransBus operated from a variety of factories around the UK, owning the former Alexander factories at Falkirk, Scotland and Belfast in Northern Ireland, the former Plaxton factories at Anston and Scarborough and the former Northern Counties factory at Wigan. It also owned the Dennis factory at Guildford.

At its height, TransBus International producing a range of bus and coach chassis and bodies, as well as fire engines and dustbin lorries. Including among its range of chassis were the Dennis Dart, and the Dennis Trident. Unfortunately, on 31st March 2004 the Mayflower Group was put into administration and by default Transbus also entered administration. On 17th May 2004, the Plaxton coach business was sold to its management and returned to its separate Plaxton identity. Four days later, the remaining parts of TransBus International, Alexander and Dennis, were bought by a number of independent businessmen (one of which was Brian Souter, owner of Stagecoach), forming a new company, Alexander Dennis.

In March 2004, Fist Midland Red renumbered their fleet but for some reason these vehicles did not recieve their new numbers for several weeks and ran without fleet numbers until early April. With the reduction in service frequency on service 420 in September 2004, one of these vehicles, fleet number 67601, moved to Worcester (Padmore Street) depot for use on “easyLINK” Service 363 and Service 364 between Worcester, Upton-upon-Severn and Great Malvern. 67601 was exchanged with 67600 at Reddich depot in March 2005.

With the sale of Kidderminster depot and Redditch depot to Diamond Bus on Sunday 3rd March 2013, all four of these vehicles were moved to Worcester (Padmore Street) depot, and remained there until Thursday 12th November 2015 when fleet number 67601 was withdrawn and passed to First Potteries Limited on the following day.

67601 was used for driver training, and then entered service with First Potteries on Saturday 21st November 2015. The three examples still with First Midland Red were all withdrawn at the end of services on Thursday 3rd December 2015, and joined 67601 at First Potteries the next day. 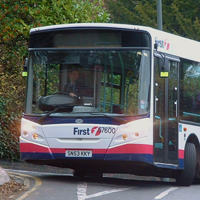 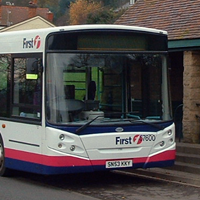 In December 2003, FirstGroup took delivery of a new 12.6m long Transbus Enviro300 group demonstration vehicle. First Avon & Somerset initially operated this vehicle at their Bath depot as the company had plans to take delivery of a batch of the vehicles. Later it moved to First Manchester for rail replacement work.

TransBus International went into receivership on 31st March 2004, but on 21st May 2004, some of the assets of Transbus were sold to form a new company, Alexander Dennis, continuing production of the Enviro300. In November 2004, FirstGroup plc. placed a £15m order with Alexander Dennis for 125 low floor buses. This order included 35 examples of the Enviro300 for their First Midland Red subsidiary, consisted of 34 new vehicles to be delivered in two batches, plus the demonstrator SN53KKY. Therefore, 67600 immediately passed to First Midland Red at their Worcester (Padmore Street) depot, entering service on Service 363 and Service 364 shortly after.

When deliveries of the first batch of new vehicle began in December 2004, this vehicle moved to Redditch depot for driver familiarisation training, and later for use on the Redditch “Overground” network. The extra length of this vehicle, plus the non-standard destination display equipment caused problems for this vehicle at Redditch, so in March 2005 she traded places with 67601, returning to Worcester (Padmore Street) depot, again seeing service on the Council sponsored “easyLINK” Service 363 and Service 364 between Worcester, Upton-upon-Severn and Great Malvern.

With the delivery of Worcester depot’s allocation of the new vehicles in June 2005 this vehicle found itself unused, presumably due to the same difficulties it experienced at Redditch, namely the extra length and the non-standard destination equipment which First Midland Red seemed unable to reprogram. On occasion, she could be seen being used by the driving school for vehicle familiarisation, but mostly this vehicle was stored, unused, at Worcester depot. In September 2005, she moved back to Redditch depot, and found a perminant home operating the towns service 51, and later recieved orange route branding for that service.

When Redditch depot was sold to Diamond Bus in March 2013, 67600 was withdrawn and taken to Hereford depot for storage. In March 2014, after being stood unused for a year, it passed to First Bristol.

With the exception of the first few examples delivered direct to First Midland Red at Worcester (Padmore Street) depot, all these vehicles were delivered to the First Leicester depot at Abbey Park Road. In the final few weeks of 2004 and throughout January 2005, these vehicles were stored at Abbey Park Road and exchanged in small groups for equal numbers of withdrawn Leyland Lynxs, with the Enviros then being stored at Worcester depot while they were prepared for service.

Of this batch of Enviros, the first 14 examples to enter service were allocated to Redditch depot, with the remainder going to Evesham depot. In ealry 2005, fleet number 67631—the one in BMMO livery—moved to Evesham depot. All of the vehicles in this batch are the standard 11.8m long type.

The specification of these vehicles feature a few luxuries that First Midland Red drivers are not accustomed to, such as…

However, one feature that would have been more useful but has been omitted from the specification of these vehicles is the fitting of CCTV cameras, both for a reversing aid, and for security.

On 24th January 2013, it was announced that First Midland Red was to sell their depots, assets and services at Kidderminster and Redditch to Rotala Plc., and at this time many of these vehicles were in service at these two depot. However, most were not included in the sale and with the exception of three examples (F/Nos: 67644–67646) all were moved to Worcester depot before the transfer of assets took place in March 2013. The three examples that did pass to Rotala were given new fleet numbers 30933–30935 and entered service at Redditch with their Diamond Bus Company subsidiary.

From the Mayday bank holiday weekend 2005, First Midland Red started to take delivery of an additional batch of 13 Alexander Dennis Enviro300 single-deck buses. These vehicles entered service at Kidderminster depot and Worcester (Padmore Street) depot on 12th June 2005 for use mainly on the Service 144 between Birmingham and Worcester. Specification for these vehicles is the same as for 67652–67664.

Staff shortages at Worcester depot in 2003 and 2004 had seen most of their workings of the service 144 operated from Kidderminster depot. This created a lot of dead mileage, as vehicle would run out of service to and from Kidderminster to Worcester, Bromsgrove or Birmingham to operate the service. Naturally, the management at First Midland Red were keen to eliminate this waste so in 2005, as staff levels at Worcester returned to normal, operation of the service was passed back. The first 15 journeys returned to Worcester depot on 12th June 2005, the day this batch of vehicles entered service, with the remainder due to follow in September with the re-organising of services for the new school year. At this time, the six Enviros allocated to Kidderminster depot passed to Worcester depot for use on this service.

On 5th September 2005, Worcester City Council re-launched their park and ride services in the City of Worcester under the new brand name “Worcester Express.” At the end of August 2005, two vehicles from this batch were repainted to orange and purple livery ready for the launch of these services, but both of these returned to Standard FirstGroup Barbie livery in March 2008 when the Council started operating the park and ride services themselves with their own vehicles. 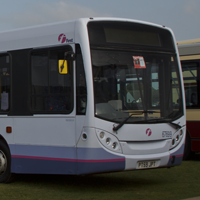 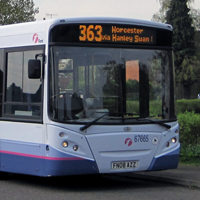 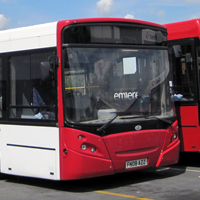 On 25th January 2013, Premier Travel Limited of Nottingham ceased trading after going into administration. At the time, the company operated a number of Alexander Dennis Enviro300 buses, and two of these (Premier fleet numbers 3319 and 3337) passed to First Midland Red (presumably via a dealer) on 26th July 2013.

Fleet number 3319 (registration number FN08AZZ) arrived in overall white livery with a red front. It was allocated fleet number 67665 by FirstGroup and repainted to the then new FirstGroup corporate livery, with “Worcester” fleet names, before entering service at Worcester on 18th September 2013. This vehicle is a first-generation example of the Enviro300 and is therefore similar to the others in the fleet, however it is not fitted with a ZF gearbox so it drives much more smoothly.

Fleet number 3337 (registration number PT59JPT) arrived in overall red livery. It was allocated fleet number 67699 by FirstGroup and also repainted to FirstGroup corporate livery before entering service at Worcester on 19th September 2013. This example is a second-generation version of the Enviro300 and is therefore unique in the First Midland Red fleet. It was originally part of a batch of three vehicles new to J.P. Travel & Transport Limited, Middleton, in September 2009 as their fleet number 453, and had only been in service with Premier Travel for a few weeks before the company had closed.

On 6th June 2006 an Alexander Dennis demonstrator, registration number SN54HXG, entered service with First Midland Red Buses Limited at their Worcester depot. The vehicle did not carry fleet numbers, but was unofficially christened “300” by drivers and local engineering staff due to the large “Enviro300” printed along the sides.

This vehicle was used only at Worcester depot, mostly on Service 44, while engineering work was being carried out on the company’s existing Enviro fleet under warranty, and remained at Worcester depot until around the end of July 2009.

On Wednesday 11th February 2009, Alexander Dennis demonstrator registration number SN08AAF arrived at Worcester depot. Like fleet number 300 above, this vehicle was on loan to the company while engineering work was being carried out on the company’s existing Enviro fleet under warranty.

The vehicle was marked with fleet number 317, and entered service with First Midland Red at Worcester depot during the early afternoon of Friday 13th February 2009, on service 32. During the following weeks, the vehicle settled into a routine where it would operate three return journeys to Birmingham each day on Service 144. On Wednesday 11th March 2009, she moved to Redditch depot and entered service there the next day. After being used at Redditch for about a week, she returned to Worcester and was used for one day before returning to Alexander Dennis.