Many people consider the BMMO D9 to be the best class of vehicle that BMMO built, so it’s not surprising that a significant number of the 345 examples built have survived into preservation. 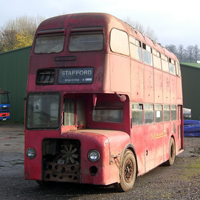 4773 was the prototype BMMO D9 and saw service with BMMO for over thirteen years. She was withdrawn in July 1972, and thankfully this rare vehicle passed to Robert Shaw, Warley, soon after for preservation. For many years she was stored and unused, but in 2010 Ian Kimberley took joint ownership and she is now undergoing a full restoration at a site in Herefordshire. 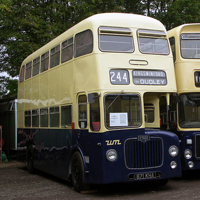 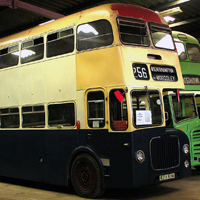 Fleet number 4871 (registration number 871KHA) was one of the first production batch of BMMO D9 double-deck buses, entering service at Stourbridge depot in July 1960. Other than a brief spell at Harts Hill depot, it remained at Stourbridge throughout the service life, and was still there when Stourbridge depot, their staff and operations passed to West Midlands Passenger Transport Executive (WMPTE) in December 1973.

Under the ownership of WMPTE, fleet number 4871 continued in service at Stourbridge depot until engine failure saw it withdrawn in August 1977. It passed to Birmingham Omnibus Preservation Society (“BOPS”), Birmingham, in October 1977 because the bodywork was deemed to be in good condition. Shortly afterwards, the group reformed as Birmingham and Midland Motor Omnibus Trust (“BaMMOT”), and the newly formed trust was able to acquired another D9, fleet number 5401, for use as a parts donor. After a delay of several years while the trust worked on other projects, restoration of 4871 atarted using the engine from 5401 and over the following years it was fully restored in blue and cream WMPTE livery.

5415 is one of the last BMMO D9 double-deck buses built, having had bodywork finished by Willowbrook after Birmingham and Midland Motor Omnibus Company Limited (Midland “Red”) were forced to stopped building double-deck bodies. She was one of two examples delivered new to Kidderminster depot in February 1966, and remained there until March 1973, when she moved to Tamworth (Aldergate) depot. In September 1977, she was one of several examples withdrawn from Tamworth by Midland Red Omnibus Company Limited (MROC) towards the end of that year, although she was not the last D9 at Tamworth as she was replaced by a similar vehicle from Stafford depot which survived until the spring of 1978.

Shortly after withdrawal, in October 1977, the vehicle passed to S. Clarke of Eastbourne for preservation and remained there until the early 1980s. 5415 then changed hands at least three times before passing to Coaching at Wheels, Nuneaton, c. 1992.

Coaching at Wheels specialised in historic vehicle private hire, and with them 5415 was returned to full PSV status and operated on private hire and light PSV duties for about three years in cream and maroon livery. Coaching at Wheels renamed to Wheels in c. 1995 and moved to new premises, and unfortunately they were no longer able to accommodate double-deck vehicles, so at this time she returned to private ownership, passing to P. Mason of Sutton Coldfield for preservation.

In 2004, in time for the Midland Red Centenary, 5415 passed back to Wheels fully restored in overall red BMMO livery, and today continued to operate for the company on private hire work. By this time, Wheels owned the trading name “Midland Red Coaches” and 5415 is one of several vehicles used to operate nostalgic private hires with a Midland Red theme.

During 2015, Wheels closed their operations and put up their fleet of vehicles for sale. At this time, 5415 found a new home near Liverpool.