All 345 examples of the BMMO D9 entered service carrying the long established bright red BMMO bus livery. “Midland” fleetname transfers in gold with black surrounds were shown along both sides of the vehicle below the lower deck window-line.

The traditional gold and black fleetname were replaced by BMMO with smaller, underlined “Midland Red” fleetnames on their buses from the end of 1968, however this was initially only on newer vehicles, with older vehicles, such as the BMMO D9, received the new transfers from June 1970.

In 1972, the National Bus Company (NBC) announced that they had decided to emphasise its national identity. To achieve this, the NBC “double-N” logo was introduced, and liveries were standardised across all the companies in the group. All coaches in the group were repainted to overall white and carried the “National” fleetname in large lettering with the local company name shown in small lettering. Buses and other vehicles kept their existing livery colour, which for BMMO was overall red, and the company name and NBC logo was shown in a standardised style on the sides.

The NBC livery used by Midland Red for their buses was known as “Poppy Red”, and repainting of all buses in the fleet started in August 1972.

Midland Red repainted the majority of the vehicles passed to WMPTE into cream and blue livery at their Central Works, Carlyle Road, as part of a four-year contract. Before being repainted, vehicles ran in their original overall red BMMO livery but with WMPTE “West Midlands” fleet names and logos. From June 1974, WMPTE repainted several examples in-house at their Walsall paint shop; these differed from those repainted by Midland Red in having cream fleet numbers on the lower panels instead of black numbers above the lowers saloon windows.

It is not intended for this website to chart the history of the West Midlands Passenger Transport Executive (WMPTE); however, a small part of that company’s history has been included on this page to illustrate how it affected the history of the Birmingham & Midland Motor Omnibus Company Limited (BMMO - Midland “Red”). For more information about the transfer of assets and services to the West Midlands Passenger Transport Executive (WMPTE) on Monday 3rd December 1973, see the “Transfer of BMMO Services and Assets to the West Midlands PTE” page in the History section of this website. 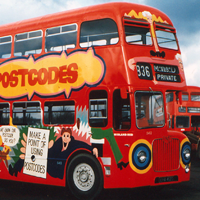 5412 was new to Sutton Coldfield depot in January 1966, remaining there until January 1973, when she was repainted at BMMO’s Central Works into mostly red overall advertising for the GPO (General Post Office), with the name “Post Office Spectacular,” to promote postcodes. At this time, she was moved to Stafford depot, then shortly after to Leamington Spa depot in July 1973, where she remained until being withdrawn in February 1977. The advertising was removed in Febuary 1974.

Many thanks to George Myatt for sending a photograph of himself working on this vehicle — Show Photograph.

5413 was new to Birmingham and Midland Motor Omnibus Company Limited (BMMO—Midland “Red” Motor Services) in January 1966 at Sutton Coldfield depot. In July 1972, she was repainted into green and white livery with overall advertising for “Hall Green Greyhound Stadium”, and moved to Birmingham (Digbeth) depot. The advertising was removed in August 1973, and in October of that year, she moved to Bearwood depot, returning to Digbeth depot in December when Bearwood closed due to the takeover of services by West Midlands Passenger Transport Executive (WMPTE). She remained at Digbeth depot, working cross boundary services, until being moved to Malvern (Spring Lane) depot in January 1976. With the closure of Malvern depot on the Friday 1st October 1976, she was placed into storage and was withdrawn a month later.

Corgi Classics Limited produced a Limited Edition 1:76 scale diecast model of this vehicle, in green and white livery with overall advertising, as operated from Digbeth depot in 1972. The model is number OM45604 in Corgi's “The Original Omnibus Company” range, and 4000 examples were produced.

Repainted into overall advertising for “Super D” D.I.Y. store, Castle Vale, in March 1973, carrying the name “The D•I•Y bus” in large letters across the front above the destination display. The advertising was removed in May 1974.

5422 was new to Leamington Spa depot in March 1966, remaining there until May 1973, when she was repainted into the mostly sky-blue overall advertising for Legal & General Assurance, Birmingham. At this time, she began moving between the various Birmingham depots, presumably as part of the advertising agreement, stating with Bearwood depot, moving to Sheepcote Street depot in July 1973, to Birmingham (Digbeth) depot in October 1973, then to Sutton Coldfield depot in November 1973.

On 3rd December 1973, she was one of the 413 vehicles to be transferred to WMPTE when Sutton Coldfield depot came under WMPTE control. 5422 finally settled at WMPTE’s Moseley Road depot in April 1974, and remained there until being withdrawn in September 1977. The advertising was removed in June 1974.