The BMMO D7 was the first double-deck bus design produced by Birmingham and Midland Motor Omnibus Company Limited (BMMO—Midland “Red” Motor Services) to the new lightweight standard. On Tuesday 1st April 1952, the BMMO Board of Directors approved funding for 373 double-deck buses built to the new BMMO D7 design, and soon after the first batch of one-hundred vehicles was ordered and production started.

All examples of the BMMO D7 had bodywork by Metropolitan-Cammell Carriage and Wagon Company (“Metro-Cammell”) to BMMO’s design. Mechanically these vehicles were similar the BMMO D5 and D5B, but two notable changes were the introduction of an improved version of the 8.028-litre BMMO “K” diesel engine, known as the BMMO “KL”, and the mounting of the engine and gearbox together in the chassis frame.

Two further batches of one-hundred vehicles each, plus a fourth batch of fifty vehicles, were subsequently ordered. In late 1956, legislation had changed to allow 30′ long double-deck buses on two axles, so on Tuesday 26th March 1957, the Board of Directors withdrew funding for the 23 BMMO D7 buses that had not yet been ordered and authorised new funding for the first 134 double-deck buses built to the new extended size, which would become the BMMO D9. 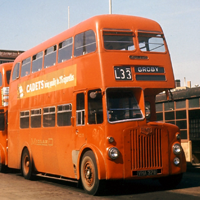 The first examples of the BMMO D7 entered service in August 1953, shortly after the last of the Leyland Titan type LD8 vehicles had entered service, and deliveries continued unbroken until November 1957, by which time 350 examples had been produced.

Initially, seating was 26 on the lower deck with 32 upstairs, making a total of 58, but fleet number 4177 (registration number THA177) entered service in December 1954 with additional seating on the top deck, making a total of 63. Despite the unpopular reduction in legroom the company clearly decided this experiment was successful and in May 1955, fleet number 4403 entered service with 63 seats, with all subsequently produced vehicles being the same. Older vehicles with 58 seats were later re-seated to 63 seats, except fleet number 4400 which was somehow missed.

The BMMO D7 was a very reliable and strong design, and the new BMMO “KL” engine was a lively performer, which earned the type a reputation for being a good service bus. However, when compared with earlier BMMO vehicles, they had a rather plain exterior and basic interior, were quite noisy, and once fitted with 63 seats suffered from poor legroom. All this resulted in the design not being as popular with passengers as they were with staff.

They were the last double-deck vehicles built by BMMO with a constant-mesh or “crash” gearbox. Although this type of gearbox was more difficult to master for drivers than later designs, they were very quiet and strong with 200,000 trouble-free miles being achieved between overhauls.

Withdrawals began in 1966, and the last examples survived with the company until 1972. A number of vehicles saw additional service with BMMO in a verity of rolls, which included mobile workshops, tree cutters, and towing vehicles. Details of these conversions can be found on the “BMMO D7 – Miscellaneous” page.