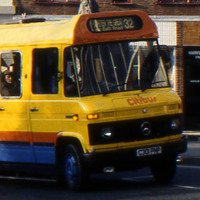 1301 was numerically the first Midland Red West Mercedes-Benz L608D minibus, entering service on 23rd November 1985 at Worcester (Padmore Street) depot for the new Citibus services. When it was withdrawn from service at Hereford depot near the end of August 2001 it was also the last remaining Mercedes L608D in service. This gave it the distinction of being the longest serving former NBC minibus still in service with its original operator.

While in service with Midland Red West it was allocated to Worcester, Kidderminster, Redditch and finally Hereford depots making it the only Mercedes L608D to serve at all the depots that operated these vehicles. While at Redditch depot it was operated with Midland Red Coaches branding and was fitted with a radio cassette player. It was the only minibus to receive the all over red livery of Midland Red Coaches, which it was still carrying when it was withdrawn, but with the markings removed.

This vehicle was kept in storage at Hereford depot for almost a year after it was withdrawn, and a number of parties expressed an interest in acquiring it for preservation. However, by July 2002 First Midland Red had not received any offers which matched the vehicles scrap value so it was passed to Erith Commercials for scrap. 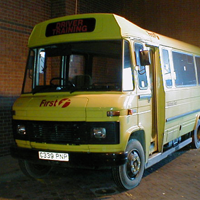 In August 1998, when the Mercedes L608D minibus fleet was withdrawn from service at Worcester depot 1339 was repainted in yellow and given the new fleet number 2039. It is now used mainly as a training vehicle by First Midland Red's Driving School based at Worcester depot and has been re-seated to B6F to allow holders of normal car licences to drive it.

When the Crowngate bus station was closed during the flooding in Worcester in November 2000, this vehicle was used as a mobile dispatch office. A desk was hastily added the the empty area in the rear of the vehicle allowing the dispatch staff to operate the temporary bus station at the Cornmarket on site. The bench seat at the rear had already been removed leaving some ready made shelving for paperwork, and all the phones from the bus station were diverted to mobile phones which were kept charged up by using the buses cigarette lighter.

In June 2001, the seats were replaced, plus an extra central seat was fitted for the driving instructor to make it B21F. However it didn't last much longer as a driver training vehicle and was withdrawn in early 2002, passing to Erith Commercials for scrap in July 2002.

This vehicle was withdrawn from normal service and fitted with an amber beacon for use by service personnel at Kidderminster depot. Although it was allocated the new fleet number 2076 it was never repainted and remained in red and cream Midland Red West bus livery.

It was withdrawn in 2002 after an accident in Bromsgrove Bus Station, when it was hit from behind by a Pete’s Travel bus. Mercedes-Benz 609D minibus number 1430 (registration number E430KUY) was repainted in yellow livery to replace this vehicle, but for some unknown reason 2076 re-entered service in mid 2002 and E430KUY was kept in storage. 2076 was finally withdrawn in October 2002 and stored for over two years before being sold for scrap. It survived long enough to be allocated FirstGroup fleet number 90275, but that was on paper only and she never operated with that number.

The original Citibus fleet of Mercedes-Benz L608D minibuses operated at Worcester (Padmore Street) depot from 1985, ie vehicles with registration C3xxPNP, were fitted with two-way radios in the cabs. This was to allow controllers to make minute by minute adjustments to maintain reliability from a control centre in Worcester. The District Manager at the time, the late Malvin Thomas, was quoted to say;

The radios will be used by the controllers both to react to disruptions and also to anticipate difficulties and so ensure smooth operation. Whereas at present vehicle changes between routes can only take place at the city centre, upsurges in demand will now be coped with by vehicles being switched or introduced even at outer termini at places such as the Glovers Needle in Warndon.

In reality the radios proved to be unpopular with drivers who disliked being interrupted while dealing with passengers and having to pull over to answer calls while driving. A number of drivers started to disconnect the radios at the start of their shift and the system was later abandoned.

The first batch of 60 Mercedes-Benz L608D minibuses delivered to Midland Red (West) Limited at Worcester (Padmore Street) depot in 1985 carried large fleet numbers painted on the roof so the vehicle could be identified from above. Most of these numbers were removed when the vehicle was repainted in to the standard red and cream Midland Red West bus livery, however a few vehicles, for example fleet number 1302, still carried them when they were withdrawn from service.

In the example photograph on the right, showing the roof of fleet number 1309, you can also see the aerial for the two-way radio system.

End of the line

First Midland Red Buses Limited withdrew the last of their Mercedes-Benz L608D minibuses from service at Hereford (Friars Street) depot at the end of August 2001. Fittingly the last in service was fleet number 1301 which was numerically the first Midland Red West Mercedes minibus, coming into service on the 23rd November 1985 at Worcester (Padmore Street) depot for the new Citibus services. This vehicle also had the distinction of being the longest serving former NBC minibus still in service with its original operator, and was also the only Mercedes-Benz L608D to have be allocated to all four of the Midland Red West depots that operated L608D minibuses, these being Worcester, Kidderminster, Redditch and Hereford. After withdrawal, 1301 was offered to several preservation groups but none were interested and she was finally passed to Erith Commercials in July 2002 for scrap.

Just to give an idea of what the drivers thought of the Mercedes-Benz L608 minibuses, have a look at this page the unofficial Midland Red West news letter — Know your Tonka.