Service X33 was operated as part of a Worcestershire County Council contract. The contract expired on Sunday 7th April 2002 and was won by Probus Management Limited (trading as Pete's Travel). 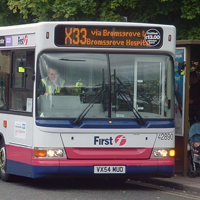 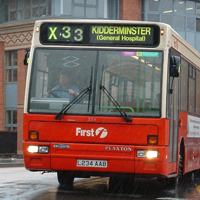 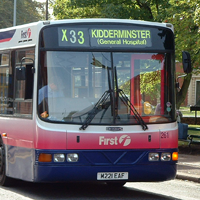 Service X33 was operated by First Midland Red Buses Limited as part of a Worcestershire County Council from Monday 1st September 2003. The service operated hourly, seven days a week, between Alexandra Hospital, Redditch, Bromsgrove, Kidderminster, and Kidderminster Hospital. The service ran as a Limited Stop service between Redditch and Bromsgrove.

The contract, which included Service 303, required low-floor vehicles to be used so Dennis Lance SLF fleet number 261 (registration number M221EAF) plus a small number of Dennis Dart SLF buses were moved from Worcester depot to Kidderminster depot facilitate this. However, all of these vehicles were acquired second-hand and were quite unreliable so the service quite often ran with a conventional stepped bus. First Midland Red finally took delivery of five new Alexander Dennis Pointers from December 2004, which allowed the service to permanently run with low-floor vehicles.

After the contract for this service expired, the service was operated commercially by First Midland Red, but at a reduced timetable.