Between Monday 7th January 1935 and Friday 1st October 1976 all local services in the Malvern area had “M”-prefix route numbers, and called at a group of stands on Belle Vue Terrace or at the nearby Post Office in Great Malvern. When Malvern depot closed at the end of services on Friday 1st October 1976, the entire network was withdrawn and replaced by a new network operated from Worcester depot. These new services had route numbers in the 408–413 range and due to height restrictions on Abbey Road and limitations with one-man operations, the main Town Centre stopping places were scattered around various stops on Graham Road, Worcester Road and Church Street.

In 1978, Midland Red Omnibus Company Limited (MROC) conducted a Market Analysis Project (MAP) in the area which identified a strong demand for a return to the old way of doing things. As a result, when the “Severnlink” MAP scheme was launched on Saturday 13th January 1979, a new network was introduced with “M”-prefix route numbers and stopping points outside the Post Office. The latter was achieved using Shortened Ford R192 vehicles that, unlike the standard Leyland National, could negotiate the height restrictions on Abbey Road.

Service M1 was first introduced as part of a number of Malvern area changes on Saturday 7th October 1972, running as a Works Service between St. Wulstans Hospital, Upper Welland, Welland, Blackmore Park Road, Peachfield Road, Great Malvern Railway Station, to Barnards Green. There was one journey each day on Mondays to Fridays, departing the hospital at 17:25. This service was always run with a one-man operated vehicle.

This Works Service was renumbered to Service M19 on Saturday 1st June 1974. 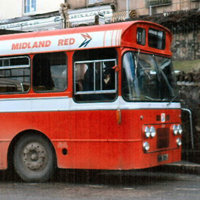 The service route started in Richmond Road, Malvern Link and ran round Belmont to Great Malvern, calling outside the Post Office. From there in ran under the low archway in Abbey Road to Barnards Green, then on to Brook Farm and the Fruitlands.

To be able to run under the Abbey Road archway, the service was operated using 27-seat Shortened Ford R192 buses. On paper, one vehicle was employed to operate an hourly service with journeys taking 28-minutes in each direction, but in reality this was unachievable and a second vehicle would be used to operate a short duplication service on the Malvern Link to Barnards Green section of the route.

Within a few weeks of the introduction of the service the Abbey Road archway was closed for repair work after being hit by a lorry, and the main Great Malvern stopping points were temporarily moved to normal bus stops on Church Street and Graham Road. When the arch reopened it was discovered the maximum vehicle height had been reduced and not even the short Fords could pass beneath, so the company were forced to make the temporary division a permanent revision.

With height restrictions no longer in place, the company could use larger vehicles on the route and there was no longer a requirement for duplication vehicles. Adjustments to the timetables were made on Saturday 26th May 1979 to make the tight timings more achievable.

Midland Red Omnibus Company Limited (MROC) ceased trading as a bus and coach operator at the end of services on Saturday 5th September 1981, and Service M1 passed to the newly formed Midland Red (West) Limited from the following day. The “M”-prefix services were operated by Midland Red (West) Limited until Friday 19th March 1982 before being withdrawn and replaced by a new network with route numbers in the 341–349 range. Service M1 was replaced by Service 341 between Malvern Link and Great Malvern, and Service 342 between Great Malvern and Fruitlands.