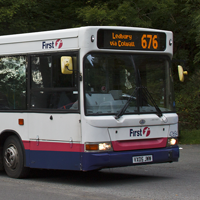 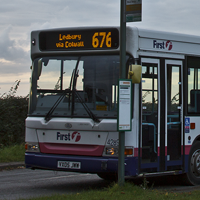 Service 676 was introduced by First Midland Red Buses Limited between Great Malvern, West Malvern, Colwall and Ledbury, from Monday 4th September 2017, as part of a seven-year contract won from Herefordshire Council to operate bus services in the Ledbury and Bromyard area.

While the majority of journeys between Great Malvern and Ledbury ran as Service 675, and served Wellington Heath between Colwall Green and Ledbury, Service 676 was operated as a direct-working variation direct along the A449 past the Wellington Inn, and thus followed the same route as Midland Red Service 478 that had first been introduced in October 1976 when Malvern depot closed.

Service 676 was operated one return journey on schooldays only calling at John Masefield School, plus one evening journey from Great Malvern to Ledbury. All other journeys operate as Service 675 and operate a combined timetable to give a two-hourly frequency in each direction on six days a week, between Great Malvern, West Malvern, Colwall Green and Ledbury.

From Monday 15th January 2018 for approximately 7-weeks, West Malvern Road (B4232) was closed to allow for essential roadworks. During this period, all journeys on Service 675 and Service 676 were diverted to run direct between Great Malvern and Wyche Cutting, omitting West Malvern. Buses arriving in Great Malvern from Ledbury ran via Church Street, Graham Road and Moorlands Road to a temporary terminus at Link Top Bus Shelter. This was to ensure they were facing the correct way for the return journey to Ledbury. As the diversion route was quite a bit shorter than the normal route, a new temporary timetable was issued with less running time and additional layover time in Ledbury. Worcestershire County Council operated a free connecting minibus service for West Malvern, running a circular route along Cowleigh Road and Old Hollow, and timed to connect with First’s services at Wyche Cutting.