Service 419 was introduced by Midland Red Omnibus Company Limited (MROC) as part of revisions to the “Wandaward” MAP scheme on Saturday 30th August 1980. The route was a variation of Service 420 linking Worcester, Bromyard, and Hereford. The majority of the route was the same as Service 420 but ran via Newtown, Shucknall, and Whitestone from Burley Gate to Withington, and the direct to Hereford.

Previously the route number 419 was used by BMMO for a school service between Ledbury, Bosbury and Cradley School, then later a market-day only service operated by Malvern depot along a similar route. 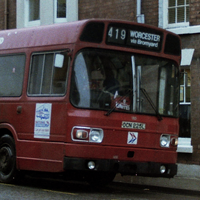 Midland Red Omnibus Company Limited (MROC) ceased trading as a bus and coach operator at the end of operations on Saturday 5th September 1981, and all bus services and the resources to operate them were divided among four newly formed companies. Both Hereford depot and Worcester depot passed to Midland Red (West) Limited, so the operation of Service 419 and Service 420 was assumed by that company when it started trading on the following day.

Initially, the timetable was unchanged from that operated by Midland Red Omnibus Company Limited (MROC). All journeys ran direct between Worcester and Broadwas along the Bromyard Road, but from Saturday 20th March 1982 the route changed to run via Bransford Road, Rushwick, and Claphill Lane, and journeys towards Hereford were rerouted to call Angel Place after departing Newport Street Bus Station. At the same time, there were minor changes to the timetable with running times being adjusted.

An early morning short-working journey of Service 419 between Newtown and Hereford was soon withdrawn, but otherwise, the number of journeys remained unchanged until privatisation five years later.

After privatisation, the Worcester, Bromyard, and Hereford group of services underwent a number of changes as the new company experimented with ways to make improvements and keep the corridor profitable. This included a short-lived variation from Saturday 1st July 1989 to Friday 31st August 1990, which ran via Alfrick and Bransford between Knightwick and Worcester, as Service 421. 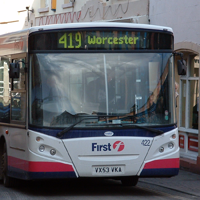 In 1997, Midland Red West Limited had become part of FirstBus, and the company renamed to First Midland Red Buses Limited on Friday 26th March 1999. Service 419 continued to be operated unchanged by Hereford depot.

In 2004, new rules restricting the maximum length of local bus services to 50 kilometres (approx 31 miles) forced First to shorten the Service 420 route as it was too long, but only by less than a mile. This was done by moving the terminus in Hereford from St Peter's Square (Shire Hall Bus Station) to the Country Bus Station off Commercial Road, and by changing the route at Withington to run via Withies Road, no longer serving Whitestone. The Service 419 variation was too long by several miles so this was withdrawn after the end of operations on Saturday 4th September 2004.