With falling passenger numbers, these routes were reduced and merged in the 1970s. The first change was when Service X91 was diverted to run via Wyche Cutting in October 1974, but more significantly Service M27 was withdrawn in April 1976, leaving only Service 477 serving Colwall Green. When Malvern depot closed in October 1976, Service M16 was withdrawn and replaced by diverting certain Service 477 journeys to run via West Malvern as variation Service 478, which also continued to Malvern Wells to partly replace the withdrawn section of Service 144.

When Midland Red Omnibus Company Limited (MROC) ceased trading as a bus and coach operator on Saturday 5th September 1981, operation of these routes passed to the newly formed Midland Red (West) Limited. The new company did not like the use of the “M”-prefix route numbers so the routes were renumbered to Service 347 and Service 348 as part of a general revision of service in March 1982. 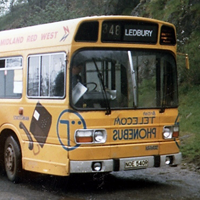 On Saturday 20th March 1982, Midland Red (West) Limited revised their services in the Malvern Area and numbered them into the 341–349 range, in line with Service 344 which was the established main route between Worcester and The Malverns. At this time, Service M7 and Service M8 operating between Great Malvern, Colwall Green and Ledbury, were renumbered to Service 347 and Service 348.

The two routes were last operated by Midland Red (West) Limited on Saturday 31st May 1986 when they were withdrawn, probably in preparation to deregulation of the bus industry later that year. They were replaced by new Service 675 operated by Newbury Coaches (Powell) of Ledbury, starting on Monday 2nd June 1986, which initially ran over the same route as withdrawn Midland Red (West) Service 348.